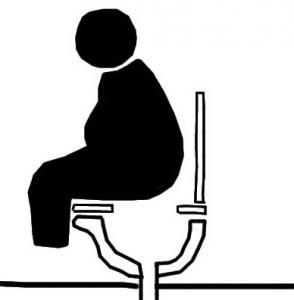 Advantages
Ultra-low-flow toilets reduce water consumption and costs to the consumer
They contribute to preserving the environment by protecting ground water from depletion and possible contamination
Easy to use and clean
Disadvantages
Some ultra-low-flow models may require flushing more than once to adequately clean the toilet bowl
Risk of clogging/plugging
It still requires a constant source of water, it will not function without it

Low-flush toilets work with a very small amount of water. The exact amount of water varies between less than a litre (for urine only) up to 6 or 8 litres. These toilets can operate by gravity or vacuum. You can read more on vacuum toilets here. Gravity toilets have special requirements regarding the slope of the pipe. Large water savings are thus possible, which even facilitate the source separation of greywater and blackwater. If the gradient to the public sewer systems is steep enough, low-flush toilets can also be retrofitted into existing buildings. However, there is a risk of pipe clogging (HEEB et al. 2007).

In some cases, the volume of water used per flush is not sufficient to empty the bowl and consequently the user is forced to use two or more flushes to adequately clean the bowl, which negates the intended water saving (TILLEY 2014). Thus, many users were disappointed and frustrated with performance problems of the first generation of low-flush toilets. Since  then, the manufacturers have solved these problems by modifying passageways to move a reduced amount of water more vigorously around the bowl. To make these toilets even more efficient, dual-low-flush toilets where developed. This type of toilet saves water by offering different flush volumes: a full-flush for solids (faeces) and a half-flush for liquids (urine) (JCSA n.y.).

Nowadays, products vary in that they may have narrower bowls with a smaller water surface, manually controlled water flow (via a foot pedal) into the bowl, or water pumps to assist in bowl emptying and cleaning. One model eliminates the “S” trap of a conventional toilet design, enabling waste to be washed down using less water. Another product flushes by opening a hinged flap to let wastes and a small amount of water fall into a lower chamber. After several seconds the flap reseals, and a blast of compressed air forces the wastewater over the trap and out a discharge line from the toilet (PIPELINE 2000).

There are discussions about the performance of low-flush toilets to transport the waste trough the building drains to the public sewer system. As already mentioned, there is a risk of pipe clogging. Especially in older buildings, drain lines (slope, diameter, length) were designed for common flush toilets. More information and researches can be found in the document “Evaluation of Low-Flush-Volume Toilet Technologies to Carry Waste in Drain lines” (GAULEY and KOELLER 2005).

Reuse of Faecal Sludge as Fertiliser

The toilet waste or blackwater (urine and faecal matter) contains the majority of the nutrients in wastewater. A century ago, toilet waste was collected in major European cities and used as fertiliser in near urban agriculture. Ordinary flush toilets use much water and the blackwater becomes diluted. Modern toilet technology (vacuum or low-flush gravity) have flush volumes below 1 litre. With these toilets collection and separate treatment of the concentrated blackwater is more interesting in order to treat and reuse it (JENSSEN et al. 2004).

Costs are not higher than a common flush toilet system. But the huge savings of flush water and the smaller volume of generated blackwater reduce operation costs significantly.

Although flushing water rinses the bowl, the toilet should be scrubbed clean regularly. It is important that no other object than faeces or urine are tried to flush away, because in this case the risk of clogging is even higher and could lead to expensive cleanout costs.

The low-flush toilet itself is safe and comfortable to use provided it is kept clean. There are no real problems with odours if used correctly (TILLEY et al. 2014). If the flush performance is bad, the bowl should be cleaned more often. Furthermore, in the absence of an appropriate (semi-)centralised treatment system, toilet wastewater flows through a sewer system directly into the environment without any treatment. This spreads pathogens and can endanger the health of residents.

A flush toilet should not be considered unless all of the connections and hardware accessories are available locally. The low-flush toilet must be connected to both a constant source of water (can be a big problem and controversy in arid climates) for flushing and a collection and storage/treatment or conveyance technology to receive and treat the blackwater. The flush toilet is suitable for both public and private applications and can be used in every climate (TILLEY et al. 2014).

This book not only identifies the threats to human and ecological health that water pollution has and highlights the consequences of inaction, but also presents opportunities, where appropriate policy and management responses over the short and longer term can trigger employment, support livelihoods, boost public and ecosystem health and contribute to more intelligent water management.

This case study estimates the annual water consumption and savings that can be realised by a family of four using a dual-flush toilet instead of a conventional 13-litre or 6-litre toilet.

This short video shows the performance of a low-flush toilet.

Toilets with FLUSHMATE® - How it works

The “How it Works” section of the company FLUSHMATE explains the flush system of its low-flush toilets.