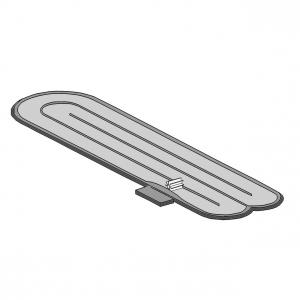 Advanced integrated wastewater pond systems (AIWPS), advanced integrated pond systems (AIPS) or advanced integrated ponds (AIPs) are an adaptation of waste stabilisation ponds (WSPs) systems based on a series of four advanced ponds: (1) An advanced facultative pond (AFP) containing a digester pit, which functions much like an anaerobic pond; (2) a high rate pond (HRP) covered with algae, similar to the facultative pond, which provide oxygen to aerobic bacteria for BOD oxidation and take up nutrients and further organics; (3) an algal settling pond (ASP); (4) and finally a maturation pond (MP) for solar disinfection and pathogen abatement. The effluent from the MP can be reused for agri- or aquaculture and the nutrient rich algae can be applied as fertilizer or used as animal feed.

Advantages
Elimination of or great reduction in the need for sludge disposal
Can treat both industrial and domestic wastewater
Growing algae can be harvested and used as a nitrogen-rich fertilizer in agriculture or as protein-rich animal or fish feed in aquaculture
BOD, TSS and pathogen removal are similar to activated sludge systems at relatively low-costs
Disadvantages
High investment costs
Needs expert design and expert maintenance skills
Energy is required for the paddle wheel in the high rate pond

The advanced integrated wastewater pond systems (AIWPS) has evolved over a 60-year period of research at the University of California, Berkeley, and other locations (CRITES et al. 2006). However, these systems are still relatively new and not well known. AIWPS or AIPS (advanced integrated pond systems) are based the improvement of conventional waste stabilisation pond system. They are comprised of a series of four advanced ponds: (1) an advanced facultative pond (AFP) containing a digester pit on its bottom, which functions much like an anaerobic pond but, in this case within the facultative pond, rather than preceding it; (2) a high rate pond (HRP) covered by algae, which take up organics and nutrients and provide oxygen to the water for aerobic bacteria to oxidised BOD (biological oxygen demand); (3) an algal settling pond (ASP), where most of the algae produced in the HRP is removed; (4) and finally a maturation pond (MP) for solar and biological reduction of pathogens. Recirculation of some of the HRP contents back to the surface layers of the AFP ensures oxygenation and odourless conditions in the latter (ROSE 1999). These modifications of conventional wastewater pond systems (WSP) allow for achieving a greater reliability and treatment performance as well as a higher tolerance to colder climates. In consequence, AIWPS can treat almost every domestic or industrial wastewater (MINES et al. 2009).

Advanced facultative ponds consist of a conventional facultative pond containing a fermentation or digester pit on its bottom. Sewage entering the system is injected at the bottom of the digester pit, where solids are trapped and consumed by anaerobic digestion producing methane. The most attractive feature of AFPs is their high capability of wastewater total suspended solids (TSS) removal, in addition to BOD removal. The facultative pond is about 4 to 5 m deep (ROSE 1999).The surface aerobic layer is about 1 m deep and helps reducing potential odour problems. Biogas may be collected using a submerged gas canopy and can potentially be used for energy production (RAMADAN et al. n.y.).

Water from the facultative pond flows to the high rate pond, where aerobic bacteria break down dissolved organic matter and algae take up nutrients and further BOD. HRPs are designed to promote the symbiosis between the microalgae and aerobic bacteria, each utilising the major metabolic products of the other. Microalgae grow profusely releasing oxygen from water by photosynthesis. This oxygen is immediately available to bacteria to oxidise most of the soluble and biodegradable BOD remaining from the facultative pond. HRPs are shallower than facultative ponds and operate at shorter hydraulic retention times (HRTs). At the rapid growth of algae, the pH can raise to above 9 since at peak algal activity carbonate and bicarbonate ions react to provide more carbon dioxide for the algae, leaving an excess of hydroxyl ions. A pH above 9 for 24 hours ensures a 100% kill of E. coli and presumably most pathogenic bacteria (ERTAS et al. 2005).

A paddlewheel is normally incorporated to drive the water around the race-track shaped pond. Because the algae supersaturate the high-rate pond with oxygen, some of this pond’s water is re-circulated to the upper layer of the facultative pond to bolster its oxygen content, thus reducing or eliminating the need for mechanical aeration.

An algae settling pond (ASP) or some other method of removing algae from the HRP effluent should follow the HRP, especially if the water from the HRP is to be used for crop irrigation. Microalgae in the influent from a paddle-wheel mixed HRP settle readily; from 50% to 80% of the algae will be removed by sedimentation in a settling pond whose hydraulic residence time is one or two days (ERTAS et al. 2005). Harvesting algae by natural sedimentation implies that at least two settling units in parallel must be provided to allow a periodic decantation and removal of the settled algal concentrate. The settling pond needs to be de-sludged once to twice a year. Harvested algae can be used as a nitrogen-rich fertiliser, or as protein-rich animal or fish feed (for the further cultivation of high protein foodstuffs), modern medicine and even cosmetics (RAMADAN et al. n.y.).

These ponds are the fourth and last steps in AIWPS. They are generally conventional maturation ponds as they are used for other pond systems such as waste stabilisation ponds (WSPs), In MPs, treated water is exposed to the sun and wind leading to natural oxygenation and solar disinfection, and thus an inactivation of pathogens.

Sheaffer International markets a variation of the AIWPS. This “Sheaffer Modular Reclamation and Reuse System” produces no sludge, no odour, and enables a 100% recovery of nutrient rich water for irrigation. The system is comprised of a deep aerated treatment cell, a storage cell, and three moving parts (grinder pump, a compressor/blower, and an irrigation system.The first stage of the process uses grinder pumps to reduce sewage solids influent and injects it to an anaerobic zone at the bottom of the treatment cell where it undergoes anaerobic digestion. Solids settle out of the anaerobic zone to the base of the deep cell, and are stored for a time period of 20 to 30 years. During the second stage of the process, the compressor/blower injects air into the treatment cell just above the anaerobic zone to create aerobic conditions at the surface level of the cell. The cells are designed to provide 14 to 36 day treatment and further reductions of organic materials. Solid components are broken down into simple organic acids, methane carbon dioxide, sulphide, ammonia, inorganic compounds, and water. The nitrogen, phosphorus, and potassium are dissolved and remain in solution for use in agricultural irrigation (ROSE 1999).

AIWPS require a similar land area as conventional lagoons (WSPs). Yet, they achieve higher rates of BOD and TSS removal, virtually eliminate sludge disposal, produce less odour, and may be adapted to energy (methane) recovery. Compared to other advanced systems (i.e. activated sludge) these systems are relatively cost effective. However, compared to conventional lagoon systems, the investment costs are high and expert skills for design and construction are required. Operation and maintenance is moderate and basically only the paddle wheel needs to be powered.

If the harvested algae and the effluent water are reused in agri- or aquaculture, this can generate an income.

To remove large garbage and coarse particles such as tree limbs, tyres, debris, paper and plastics,the wastewater needs to be screened and pre-treated before it enters the AIWPS (MINES et al. 2009).

The algal settling pond needs to be desludged once to twice a year. High rate algal ponds (HRPs), which are the key component of AIWPS, are complex and sensitive reactors which are much more difficult to operate correctly than conventional WSPs (and indeed activated sludge processes, VARON et al. 2005). AIWPS systems are rather complicated and have until now only been applied in developed countries. However, due to their high efficiency along with low energy requirements, AIWPs may also be feasible for the developing world.

If the effluent from the AIWPS, which has passed through the AFP-HRP-ASP sequence, is to be reused for agricultural or landscape irrigation where human contact is expected, storage for a minimum of 10 to 15 days in a maturation pond will result in an adequate removal of pathogenic bacteria (ERTAS et al. 2005). Instead of maturation ponds, constructed wetlands may satisfy higher concerns regarding human health risks, but these risks are generally minimal.

AIWPS are adapted to treat high loads of both, industrial and domestic wastewater in both rural and urban areas. But the design, construction and maintenance need expert skills. An energy source is also required for operation.
The process is rather complicated and thus AIWPS are more suited for areas where a professional installation, operation and maintenance can be guaranteed, which may be difficult in some developing countries. The effluent can be used for irrigation in agriculture and algae growing in the HRP can be harvested and used as fertiliser or animal feed.

The report suggests that emerging trends in low-cost, decentralised naturally-based infrastructure and urban wastewater management which promote the recovery and reuse of wastewater resources are increasingly relevant. Technologies for these sanitation options are presented. The concept of managing urban wastewater flows at a decentralised or "intermediate" level, based on micro watersheds, is explored. Effluent treatment standards that are currently accepted in order to protect public health and safety are reviewed.

An Idea Whose Time Has Come

The report suggests that emerging trends in low-cost, decentralised naturally-based infrastructure and urban wastewater management which promote the recovery and reuse of wastewater resources are increasingly relevant. Technologies for these sanitation options are presented. The concept of managing urban wastewater flows at a decentralised or "intermediate" level, based on micro watersheds, is explored. Effluent treatment standards that are currently accepted in order to protect public health and safety are reviewed.

Short report edited by an agency of the United States Government, describing one of the first fully working AIWPS constructed over 30 years ago and treating both municipal and industrial wastewaters at a time.

Exceeding Tertiary Standards with a Pond/Reed Bed System in Norway

Exceeding Tertiary Standards with a Pond/Reed Bed System in Norway

Exhaustive description of the design and performance of stabilization ponds including advanced systems.

A useful and short description of AIWPS is given on this private webpage of Dr. Victor M. Ponce.

Article on this blog about the plant in St. Helena, California (designed by J.W. Oswald from the University of Berkley). The production of algae, which take up the large part of nutrients (N and P) from the wastewater during the treatment) and the reuse as fertilizer is also suggested.

In 1994, an AIWPS had been planned to treat domestic wastewater downstream of Varanasi (India) in collaboration with USAID. The Varanasi AIWPS project is currently still in the planning stages.