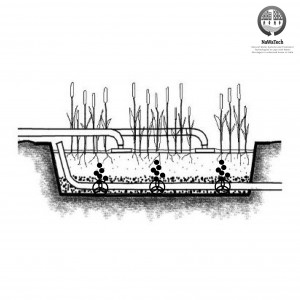 AEWs are an advanced type of CWs, which allow more efficient removals of contaminants from wastewaters, due to the higher availability of oxygen. The wastewater being treated flows subsurface beneath an aggregate substrate, which is aerated mechanically from below, with an appropriate distribution system of air. This system is ideal for treating wastewater with high loads of BOD and COD and for minimising the footprint.

Advantages
Very high reduction of organic matter, nutrients and pathogens, even in cold climates.
Less use of land than the standard CW, less clogging.
More flexible design, depending on the blower capacity the system is easier to upgrade to a higher load.
Disadvantages
Requires expert design and supervision.
Use of delicate technological components, which are not needed in regular passive CW systems.
Higher energy consumption due to aeration compared to other passive types of CWs.

After preliminary and primary treatment (generally a manual or automatic screen followed by a sedimentation phase in septic tanks or lagoons), the secondary treatment is provided in aerobic bioreactors, the AEW beds. The flow in these beds may be horizontal or vertical. The aerated EW is an advanced type of wetland where a coarse bubble aeration network is placed under the gravel substrate of a sub-surface flow wetland basin, and air is supplied to it by a blower. This eco-technology allows the removal rates of biologically-oxidable contaminants (e.g., ammonia, BOD) to increase to almost complete elimination levels (HIGGINS et al. 2010a). While any kind of wetland cell can be operated in the AEW mode, sub-surface flow (SSF) cells are mainly used (HIGGINS 1997). Aerated SSF EWs generally have much smaller surface area, even 5-10 times less size of the equivalent passive sub-surface CWs. Aeration was found to profoundly affect treatment performances. When aerated at 0.85 m3 of air per hour per m3 of wetland bed, the volumetric (2TIS) BOD5 removal rate constant averaged 5.4 day-1 with a temperature coefficient (θ) of 1.03, based on experiments conducted at 22°C and 4°C. In contrast, the non-aerated wetland had a rate coefficient of 0.55 day-1 (WALLACE and LINER 2009). So AEWs are capable of achieving >95% removals of most pollutants, during summer and winter, in facilities which are only a fraction of the size of traditional CWs (HIGGINS et al. 2010b). In special conditions, such as water contaminated with glycolic compounds in airport runoff treatment (where the AEWs were successfully used), the operation of the treatment system can be influenced by the limitations of nutrients if the main effluent does not contain nitrogen, phosphorus and other nutrients; so the nutrient demands for bacterial growth should always be estimated in order to provide the appropriate fertilisation in case of lack of nutrients. As regards to the consumption of energy, it depends of the type of wastewater and the oxygen demand: i.e. to treat the urban wastewater of a municipality in Eastern Ontario, an external energy input of only 0.16 kWh/m3 is required and this energy input is considerably less than activated sludge processes (2.39 – 0.51 kWh/m3) (WALLACE et al. 2006).

O&M requirements for AEW are relatively simple and conducted for the great part by unskilled labour as the other type of CWs treatment schemes, which may allow a community organisation or a private to manage the system. Nevertheless the system is more complex from a technological point of view, and a skilled labour could be required to conduct and to maintain the blowers and the forced aeration system. The maintenance includes a periodical sludge and scum control and emptying in primary treatment, plant harvesting, checking the functioning of the distribution system and of the aeration system, regulating the air flow according to inlet wastewater characteristics, ensuring clogging does not occur in the bed and sampling of the discharged water.

The costs per surface unit are higher than VFs and HFs because of the presence of the air compression system and the air distribution pipes, but the required surface per PE is sensitively lower. Considering the investment for the treatment system at Buffalo Niagara International Airport, the costs are around 300 €/m2, that means about 60-120 €/PE for large scale systems, going up to 150 €/PE for medium size and 200 €/PE for small size plants. In developed countries the maintenance cost is in the range of 15-22 €/PE.

This new technology has been developed in America, and responds to the needsto process large loads of COD, but can be applied in any context to reduce the CWs footprint. A very interesting case study is the Buffalo Niagara International Airport. Here the problem was the wastewater with excessive quantities of COD, due to the use of glycol de-icing compounds. So, after several years of permit limit exceeded, in the 2009 the AEW system was completed with an area of approximately 19,000 m2, divided in 4 large aerated VF AEW cells (51 m by 91 m each, located in an open area near the airport’s main runway). The filtering beds were filled by washed gravel (10-15 mm of diameter) with 1.5 m thickness. Influent is distributed uniformly over the cells surface via inlet distributor chambers buried near the substrate surface, and flows vertically down through the gravel to a drainage system. Air is supplied from four air blowers (186.5 kW) located in a nearby Utility Building, and is pumped to the cells through a network of perforated aeration pipes located on the bottom of the beds. When HF EW cells were aerated at 0.85 m3 air per hour (per m3 of wetland bed) the carbonaceous BOD5 removal rate constant averaged 5.4/d with an Arrhenius temperature coefficient (θ) of 1.03. While the design was based on a BOD5 loading rate of 4,500 kg/d (corresponding about 50,000 PE), actual loadings exceeded 20,000 kg/d (corresponding about 220,000 PE). BOD5 removals remained in the range of 90 to 100% (with an average removal rate of 98.3%), and reductions in treatment efficiency were only observed at the heaviest organic loadings (WALLACE and LINER 2009). The realisation cost was 10,000,000 USD, and the operation cost was in the 1st year of 100,000 USD, while now is less than 50,000 USD/year (CLARK 2012).

At London’s Heathrow Airport the existing standard HF facility was upgraded in 2010 with a forced bed aeration system, to provide a significant increase in treatment capacity, from 350 kg of BOD to a minimum of 3,500 kg of BOD per day (WALLACE and LINER 2009). In Casper, Wyoming, an AEW was implemented in a former BP refinery plant. Today, it is the largest remediation wetland in the United States, and the realisation cost was 3,400,000 USD (WALLACE 2004). This treatment system needed to handle up to 11,000 m3/day of gasoline-contaminated groundwater. The plant consists in a cascade aeration system (for iron oxidation), a surface-flow wetland (for iron precipitation) of 0.6 ha (divided in 2 basin), and 1.3 ha of aerated HF system, divided in 2 circular basin (with 90 cm deep gravel beds).The design flow rate for the system is 6,000 m3/d, although actual flows are approximately 2,700 m3/d (45% of design), with a 100% of benzene removal percentage (WALLACE 2011).

In Wellsville, New York, in a closed oil refinery of the Sinclair a treatment facility was implemented consisting in four major units that are designed to reduce metals, organic compounds, and buffer the pH of the recovered groundwater. A cascade aeration system, a sedimentation pond, a series of surface flow wetlands (3 in parallel) of 0.7 ha, and a series of vertical flow wetlands (5 in parallel) of 0.07 ha were constructed. The system is designed to operate at 840 m3/day, but actual flow rates have exceeded this by 20%, with a removal percentage of 87% for the benzene and 98% for iron.

In Canada, the project for the North Glengarry (Eastern Ontario) domestic water treatment with AEW is currently under construction. The pilot facility demonstrates that the nitrification of domestic wastewater with AEW requires significantly less surface, approximately 30.4 ha by a standard subsurface flow CW, whereas only 1.4 ha by AEW (WALLACE 2006).

No experiences in India are referred on this quite new technology.

Presentation on the implementation of a subsurface engineered wetlands at the Buffalo Niagara International Airport.

An advanced type of constructed wetland (CW) called an engineered wetland has been developed which allows more efficient removals of contaminants from wastewaters and stormwaters at rates in many cases an order of magnitude higher than those achievable with ordinary CWs.

Article about the treatment of glycol runoff on airports.

Deicing in a Green World

Deicing in a Green World

Article about treating deicing fluids on airports with an example of a engineered wetland system at the Buffalo Niagara International Airport.

This study focuses on the treatment performance of two full-scale treatment wetlands constructed by BP for groundwater remediation. The first is in Casper, Wyoming commissioned in 2003); the second is located in Wellsville, New York (commissioned in 2008). Treatment wetlands were selected in both cases due to low operating costs, which result in favorable life-cycle costs when managing legacy contaminants associated with former refining operations.