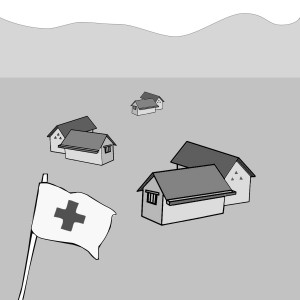 Rural communities are commonly defined by a more widespread dependency of local livelihoods on agricultural or pastoral practices as well as a reduced access to community infrastructure, compared to urban areas (UNHCR 2015a). When displaced communities settle in rural areas, they reside in host villages or in informal, dispersed self-settlements outside of camps and cities (UNHCR 2015b). In the host villages, they often live amongst local households or on land or properties owned by the local people, particularly when the displaced and the local communities share cultural or religious ties (UNHCR 2015a). This factsheet describes the situation of refugees and Internally Displaced People (IDPs) in rural settings.

For millions of refugees and Internally Displaced People (IDPs), self-settlement constitutes the preferable alternative to Camps (SCHMIDT 2003). Advantages for the displaced populations include the possibility to remain anonymous, as well as to create independent livelihoods (UNHCR 2015c). On the downside, IDPs and refugees outside of camps are often forced to revert to the poorest or most unfavourable areas and they often lack the legal documents that safeguard them from exploitation, arrest or detention (UNHCR 2015b).

Most displaced populations outside of camps settle in Urban Settings, however, some IDPs and refugees also reside in rural areas. While it is difficult to define such contexts in terms population size (thresholds vary globally), rural communities are commonly defined by their stronger dependency on agricultural or pastoral practices and their reduced access to community infrastructure (UNHCR 2015a). Of the total refugee population outside of cities and towns, about 2% live outside of planned or managed camps (UNHCR 2016).

What distinguishes rural settings from camps or urban settings, is that the resources of the local population are often already stretched before the arrival of the displaced and that access to basic social services, education and healthcare is limited. Small and medium-sized rural communities have far less capacity to absorb displaced people and experience a stronger negative impact on their vulnerable agricultural or pastoralist livelihoods due to their small absolute numbers, their increased poverty levels and their limited livelihood options. At the same time, remote, rural areas often receive little support from governments or the aid community. For this reason, the host communities and the displaced people often suffer nearly equally, which can give rise to tensions and conflicts (THE GLOBAL CCCM CLUSTER 2014 and UNHCR 2015a).

Types of Shelters in Rural Settings

When displaced communities reside in host villages, they usually live amongst local households or on land or properties owned by the local people. This is particularly common in (but not limited to) situations where the displaced and the local communities share cultural or religious ties (UNHCR 2015a).

Outside of villages, displaced people settle in small groups on land or in buildings they are not legally permitted to occupy. When settling in such dispersed and scattered places across large areas, the displaced receive little or no assistance and guidance from the aid community or local government (UNHCR 2015b).

Besides ensuring adequate and non-discriminatory access to housing and facilities for health, nutrition, security and comfort, the – often limited - humanitarian response in rural settings focuses on recovering, preserving and improving the local resources on which the displaced and host communities rely. By strengthening the local economy and by building local capacities, humanitarian response aims to build the enabling environment that allows the displaced and host communities to meet their basic needs and to live productive, harmonious and dignified lives that yield sustainable, positive and long-term returns (UNHCR 2015b, UNHCR 2015bc, UNHCR 2015d). However, humanitarian response in rural settings is faced with considerable constraints, including (adapted from THE GLOBAL CCCM CLUSTER 2014):

In Lebanon, Syrian refugees call for dignity and work

In Lebanon, Syrian refugees call for dignity and work

This desk review looks at issues and challenges of supporting populations in urban displacement settings and outside of camp locations. It aims to explore how CCCM resources and experiences of camp-based responses can be applied to addressing the needs of displaced populations outside of camps, in particular in urban environments.

Alternatives To Camps - Response In Urban And Rural Settings

Alternatives To Camps - Response In Urban And Rural Settings

Livelihoods and Self Reliance in Rural Areas. In: Emergency Handbook

Livelihoods and Self Reliance in Rural Areas. In: Emergency Handbook

The International Fund for Agricultural Development (IFAD) announcement for the establishment of a new financing facility to assist refugees, displaced people and their host communities to address the increased pressure put on rural areas by the influx of millions of people. The facility will be now launched as a Clinton Global Initiative (CGI) Commitment to Action at the CGI 2016 Annual Meeting which coincides with the United Nations Summit for Refugees and Migrants.

This thematic issue of UNESCO’s International Journal on Multicultural Societies (IJMS) addresses the issue of migration will remain an important part of the “new Europe” by exploring integration approaches and processes for different groups of migrants in new settlement countries at macro and micro levels. It pays particular attention to the geographical dimension of migrant integration by examining both urban and peripheral/rural contexts. This introduction provides the background and context to four subsequent contributions.

This entry discusses WASH responses in rural dispersed settings. WASH interventions help to improve hygiene and health, and reduce morbidity and mortality among both refugees and host populations. In the first phases of an emergency, a WASH response in rural dispersed settings focuses on identifying WASH infrastructural gaps and needs, and software components required, as well as monitoring the WASH situation.

This study examines cases where UNHCR and other humanitarian actors have implemented programmes to support hosting, both in individual families and host communities, with a view to sharing experiences and learning for future programmes. Examples of assistance methods examined in this study cover different displacement contexts and phases. Overall, the study shows that it is possible to support hosting situations but that doing so may be more complex and time-consuming than assisting IDPs in camps. It is important to recognize that in some cases, camps may provide greater protection from violence and abuse. The aim should be to respect how IDPs choose to cope with their displacement and to support their choices where possible.

Plan of Action: Jordan 2014–2018 Resilient Livelihoods for Agriculture and Food and Nutrition Security in Areas of Jordan Affected by the Syria Crisis

Plan of Action: Jordan 2014–2018 Resilient Livelihoods for Agriculture and Food and Nutrition Security in Areas of Jordan Affected by the Syria Crisis

The overall goal of this Sub-Regional Strategy is to strengthen the resilience of livelihood systems (including individuals, households, communities and agro-ecosystems). In this context, the strategy identifies key emergency response, agricultural restoration, livelihood recovery, risk-sensitive agricultural development and related policy and capacity development interventions aimed at humanitarian relief for internally displaced persons (IDPs), refugees and returnees; recovery and stabilization of national agriculture sectors; and strengthening of the resilience of Egyptian, Iraqi, Jordanian, Lebanese and Turkish host communities to help them withstand the impact of the Syria crisis.

FAO (2014): Plan of Action: Jordan 2014–2018 Resilient Livelihoods for Agriculture and Food and Nutrition Security in Areas of Jordan Affected by the Syria Crisis. Rome: Food and Agriculture Organisation of the United Nations Regional Office for the Near East and North Africa Amman URL [Accessed: 19.09.2016]

The Impacts of Refugees on Neighbouring Countries: A Development Challenge. World Development Report 2011

The Impacts of Refugees on Neighbouring Countries: A Development Challenge. World Development Report 2011

THE GLOBAL CCCM CLUSTER (2014): UDOC Urban Displacement & Outside of Camp (UDOC).This desk review looks at issues and challenges of supporting populations in urban displacement settings and outside of camp locations. It aims to explore how CCCM resources and experiences of camp-based responses can be applied to addressing the needs of displaced populations outside of camps, in particular in urban environments.