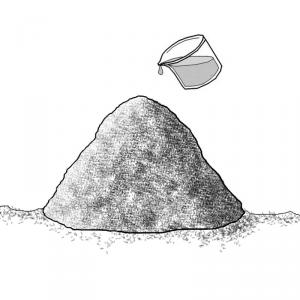 Soil amendment includes all inorganic and organic substances mixed into the soil for achieving a better soil constitution regarding plant productivity. Soil amendment does not include mulching, which includes substances lying on top of the soil. There are different substances for different soils and plants to optimise the soil conditions. A very common amendment is the addition of organic matter like compost, due to its low production costs.

The reason for soil amendment is to provide a better environment for roots and plant growth: this includes the improvement of the soil structure and water holding capacity, the availability of nutrients, and the living conditions for soil organisms, which are important for the plants to grow. Furthermore, a better soil texture and better root growth avoids soil degradation during heavy rains or in windy regions. It also supports the nutrient cycle when organic amendments are used (e.g. manure). Beside soil amendment, there are several methods to provide soil moisture conservation such as soil cover and reforestation (living plants), mulching or several tillage techniques. Of course it is also very important that a crop is planted which is suitable for the given climate. Basically, any organic or inorganic material that is added to the soil and improves its quality can be considered as soil amendment. The type of amendment chosen depends entirely on how the soil needs to be changed. By using soil amendment, almost every type of soil can be made fertile (WEST COAST SEEDS 2011).

Before incorporating into ground beds, most organic amendments, especially sawdust, cedar chips, bark and bagasse, should be composted or aged, and sterilised before use if possible. All of these amendments have a high C:N ratio. Use of amendments which are not composted and have a high C:N ratio will deplete N from the soil, may cause a salt or an ammonia/ammonium burn, or may cause damage due to heat build up.

Humic acid is a principal component of humic substances, which are the major organic constituent of organic soil amendments. Organic soil amendments (humus) have been known by farmers to be beneficial to plant growth for longer than recorded history. It was supposed that humus was used directly by plants, but it was shown later that plant growth depends upon inorganic compounds. Therefore, many soil scientists held the view that organic matter was useful for fertility only as it was broken down with the release of its constituent nutrient elements into inorganic forms. At the present time, soil scientists hold a more holistic view and at least recognise that humus influences soil fertility through its effect on the water-holding capacity of the soil: the spongy structure of organic matter is able to bind water and some inorganic molecules which act as micro- or macro-nutrients. Consequently, humic acids also slow water evaporation from soils. This is especially important in soils where clay is not present or in a low concentration, in arid areas, and in sandy soils without the capability to hold water. The oxygen end of another water molecule bonds with the hydrogen end of another, until the evaporation rate is reduced by 30% (NUTRANETICS 2000).

An additional benefit of organic amendments is also the fact that organic matter feeds soil microbes, which in turn release nutrients into the soil, thereby increasing soil fertility.

Factors to Consider When Choosing an Amendment

There are at least four factors to consider in selecting a soil amendment:

Table 1: Permeability and water retention of various soil types. This can be changed by adding an amendment (see table 2). Source: DAVIS & WILSON (2005)

Table 2: Depending on crops, permeability and water retention of soils (table 1) can be adjusted. Source: Davis & Wilson (2005)

Most inorganic amendments are mined from natural deposits and further processed to yield the final product. Heavy machinery and technical know-how is necessary to produce such amendments. These facts cause higher costs in production. In the other hand, organic amendments have high self-help compatibility, because farmers can produce them on-site. There are numerous methods that help to produce organic amendments and support a sustainable handling of the local nutrient and water cycle. Composting toilets, terra preta toilets, fossa alternas or arborloos, UDDT are toilet systems that generate organic amendments. According to GIZ (2010), there are more organic substances available than inorganic, and they are generally cheaper.

Soil amendments have to be handled carefully. Soil does not have the capacity to bind substances ad infinitum without releasing them. If too many nutrients or organic matter are put into the soil, they can be released and cause an outflow into the groundwater and surrounding rivers and lakes, which can cause water pollution (GIZ 2010).

Soil amendments, if managed carefully, can be applied everywhere. Care has to be taken in choosing the appropriate soil amendment depending on the initial soil conditions. Especially organic amendments can be produced locally. Mixture into the soil can be time consuming

Communities can protect water resources by instituting minimum requirements for organic matter in soil. Compost, much of which is generated locally, when incorporated into soil improves water holding capacity and soil quality. By incorporating compost into soil for establishment of lawns and landscape plantings, water used for irrigation is conserved and the potential for groundwater contamination is reduced. Read more about it in this paper.

This document draws upon the material prepared for fertiliser strategy as-sessment, summarises the information on the approaches to enhancing fertiliser supply and use in Africa, and identifies some future steps.

Sustainable agriculture, which is characterised by farming profitably while minimising damage to the environment, is not easy to practice. “Conventional” agriculture in the USA is commonly considered to involve practices that have potential to damage the environment. These include tilling the soil excessively, over applying readily soluble inorganic fertilisers (“chemical fertilisers”), and over applying pest-control formulations (herbicides, insecticides, fungicides, etc.). “Sustainable” agriculture attempts to find alternatives to such practices, alternatives that are economically feasible but have less potential to cause environmental damage.

This guide on integrated plant nutrient management, dealing with various aspects of plant nutrition, is an attempt to provide support to the ongoing efforts directed at enhanced and sustainable agricultural production. It seeks to bridge the scientific knowledge gap, and it presents updated information on plant nutrition with emphasis on INM. In helping stakeholders to improve their ability to identify and resolve constraints relating to plant nutrition – be they of a technical, economic, social or policy nature – and to demonstrate on the field practical ways of increasing production through efficient plant nutrition, the guide should assist in achieving the goal of food security.

This publication covers basic soil properties and management steps toward building and maintaining healthy soils. The publication is divided into three distinct sections, each with its own purpose. Section 1 deals with basic soil principles and provides an understanding of living soils and how they work. In section 1 you will find answers to why soil organisms and organic matter are important. Section 2 covers management steps to build soil quality on your farm. The last section covers farmer stories of people who have successfully built up their soil. A large resource section of other available information concludes the publication.

This paper is a product of a workshop, which was hosted by the U.S. EPA in 2006. Soil amendments of interest consist of waste residuals such as municipal biosolids, animal manures and litters, sugar beet lime, wood ash, coal combustion products, log yard waste, neutralising lime products, and a variety of composted agricultural by-products, as well as traditional agricultural fertilisers.

A corporation located in the United Kingdom focuses on soil organic matter research and practical advices for farmers. There was a case study and a bro-chure released in 2010.