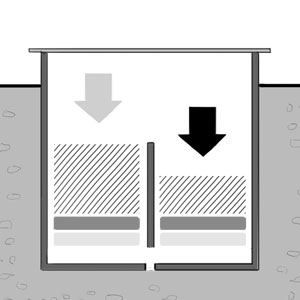 Advantages
The effluent (filtrate) from a compost filter has no unpleasant odour compared to anaerobic pre-treatment systems (e.g. septic tanks)
There is no biogas production since it is an aerobic process
Produces compost that can be used for gardening or farming
No expensive sewers connection to a centralised treatment plant
Can be operated and maintained by everyone after a short training
Disadvantages
Needs more “hands-on” maintenance than other pre-treatment methods
Use is limited to small units (decentralised wastewater treatment systems)
Compost filter bags only work with highly concentrated blackwater, because too many solids may be washed out of the filter bags otherwise
Clogging may occur, usually due to having selected the wrong filter bags or substrate or due to bad maintenance
The leachate (liquid effluent) requires further treatment