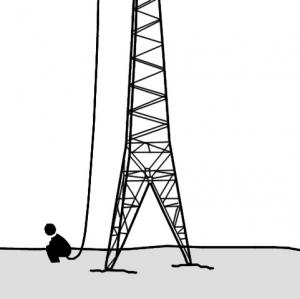 Biogas is a mixture of methane, carbon dioxide, water and hydrogen sulphide produced during the anaerobic decomposition of organic matter. Biogas can be recovered and used either directly for cooking, lighting or it can be transformed into any kind of thermal, electrical or mechanical energy. It can also be compressed, much like natural gas, and used to power motor vehicles. Methane is the valuable component when using biogas fuel. The calorific value of biogas is about 6 kWh/m3, what corresponds to about half a L of diesel oil.

Biogas is a combustible gas mixture produced during the anaerobic digestion of organic matter in an anaerobic biogas reactor (e.g. large-scale digester, biogas settler, digestion of organic waste, etc.; see also anaerobic digestion, general factsheet).  Biogas can be recovered and used either directly for cooking and lighting or it can be transformed into heat in a gas heater system or into combined heat and power (CHP) in a cogeneration unit (MES et al. 2003; JENSSEN et al. 2004; WRAPAI 2009). During anaerobic digestion, wastes are treated and degraded and biogas is produced. Anaerobic treatment also has the advantage over aerobic treatment of a smaller emission of greenhouse gases. Therefore, biogas is a renewable green energy source.

Typically biogas is composed of methane (50–75%), carbon dioxide (25-50%) and varying quantities of water (H2O) and hydrogen sulphide (H2S) (PIPOLI 2005; GTZ 2009). Other compounds can also be found, especially in waste dump biogas: ammonia (NH3), hydrogen (H2), nitrogen (N2) and carbon monoxide (CO) (SCHALLER 2007). The exact composition and amount of each gas in the mixture depends on many factors such as the type of digester and the kind of organic matter, which is digested. Different sludge compositions require different/specialised reactor designs to achieve a high conversion.

Methane is the valuable component under the aspect of using biogas fuel. The calorific value of biogas is about 6 kWh/m3, which corresponds to about half a liter of diesel oil and can be utilised directly as a heat source or to produce electricity. In all cases, the biogas must be dehumidified and purified before combustion; otherwise it can damage the gas engine (ISAT/GTZ 1999 Vol. I).

There are different kinds of technology to convert the chemical energy in the biogas into mechanical and thermal energy and finally electricity. In principle the chemical energy of the combustible gases is converted to mechanical energy in a controlled combustion system by a heat engine. This mechanical energy then activates a generator to produce electrical power. The most common heat engines used for biogas energy conversion are gas turbines, which is an internal combustion engine (e.g. gas turbines, reciprocating engines) and external combustion engines (e.g. Stirling engines).

For small-size heat engines, external combustion engines are popular as they are more efficient and less expensive than small gas turbines. However, gas turbines may be more efficient when operating in a cogeneration cycle producing heat and electricity. Cogeneration or combined heat and power (CHP) describe the simultaneous generation of both electricity and useful heat. Heat engines (also thermal power plants) in general do not convert all of their thermal energy into electricity. In most cases, a bit more than half is lost as excess heat. By capturing the excess heat, CHP uses heat that would be wasted in a conventional power plant, potentially reaching an efficiency of up to 89%, compared with 55% for the best conventional plants available (WRAPAI 2009). This means that less fuel needs to be consumed to produce the same amount of useful energy. By-product heat at moderate temperatures (100-180°C) can also be used in absorption chillers for cooling (WRAPAI 2009). A plant producing electricity, heat and cold is sometimes called trigeneration or more generally a polygeneration plant.

Large-scale biogas conversion plants are almost always cogeneration plants based on gas turbines (internal combustion engines). The mechanical energy produced in such plants comes always from the pressure related to the change in temperature of a gas. The temperature gap required can lie either in a high temperature range or a low one. Topping-cycle plants for instance primarily produce electricity from a steam turbine based on a low temperature cycle (WRAPAI 2009): The heat from the combustion of the biogas activates a steam turbine, the exhausted steam is condensed and the low temperature heat released from this condensation is utilised for district heating.
Bottoming cycle plants produce high temperature heat for industrial processes. Then, a waste heat recovery boiler feeds a steam electrical plant (WRAPAI 2009). Bottoming cycle plants are only used when the industrial process requires very high temperatures, such as furnaces for glass and metal manufacturing, so they are less common.

Biogas systems are an environmentally friendly way of energy production and have a positive impact on climate change. In fact, the contribution of a methane molecule (CH4) to the greenhouse effect is 21 times greater than that of a carbon dioxide molecule (SUSANA 2009). Therefore burning methane, even though producing CO2, reduces its impact on the environment.

This technology is easily adaptable and can be applied at community or city level. To minimise distribution losses, the reactors should be installed close to the CHP where the gas can be used.
The energetic use of biogas causes different environmental and economical impacts depending on which system is used. The electricity generation using biogas in landfills fulfils the electricity requirements of the plant and a surplus of energy can be delivered to the grid. In the agricultural sector the biogas produced, mainly in anaerobic digesters fed by manure residues can provide energy surplus to, depending one the number of animals and the technology used to treat their residues.

Biogas cogeneration is also extensively used or being aggressively developed in rural China, Nepal, Vietnam, rural Costa Rica, Colombia, Rwanda, and other regions of the world where waste management and industry closely interface.

This chapter is part of a publication, commissioned by the Netherlands Agency for Energy and the Environment (Novem) on the status and perspectives of research and development in the field of high-tech biological production of methane and hydrogen. Chapter 4 gives a short but precise introduction the technological aspects of waste treatment by anaerobic digestion and the reuse of the produced biogas.

The sewage treatment process at SABESP (Basic Sanitation Company of Sao Paulo State, Brazil) has until now burnt some of the biogas produced in the anaerobic digester to enhance the process temperature and the other part was burnt in order to limit impact of emission. The transformation of this excess biogas into electricity would be a sustainable solution generating even additional income. An alternative to burn it in flare is the biogas conversion into electricity through engines or microturbines. This paper describes the proposed system to convert biogas in electricity and heat using microturbines (30 kW ISO).

PRENMA Consulting has created a presentation on biomass and biogas technologies. The main topics are the anaerobic function of digesters and the usage of gas. Different exemplary plants in Europe are including many pictures and technical schematics.

On this factsheet, the CHP-plant manufacturer ANAMA Energies describes the technology of a large-scale CHP-plant run by biogas and summarizes the technical facts and figures of a provided plant model.

This presentation illustrates the case of Lille (France), where biogas produced from green waste biomass is used to run the urban bus fleet.

The aim of this publication is to build a bridge between the elaborate literature and information on the biogas production side and the existing technical and scientific know-how on the side of internal combustion engines. An engine fuelled by biogas shall become understandable as a core module in a system of energy supply, energy transformation and a demand of energy for a useful purpose. This publication attempts to provide a source of essential information for decision-making, planning, modification and operation of biogas engines within this system.

This presentation gives information on the agricultural aspects of biogas production and focuses on the process of digestion and fermentation. But it also provides knowledge about different ways of using biogas including cogeneration and fuel cells.

This factsheet of Sustainable Sanitation Alliance describes the impact of greenhouse gases on climate change and focuses on the advantages of renewable energies. Therefore many different technologies like production of biogas or short-rotation-plantations are mentioned.

Anama Energies Pvt. Ltd. (Formerly known as Anama Consultants) is a cogeneration plant designer and manufacturer located in India. The official homepage of ANAMA provides up to date information on biogas based cogeneration plants.

The webpage of Midwest Rural Energy Council (MREC) provides a wide range of information on implementing small- and mid-scale biogas plantations in order to produce electricity.

Appropedia is the site for collaborative approaches to sustainability, poverty reduction and international development. This article is about simple and sustainable biogas production and use.

This webpage presents the proceedings of the International Seminar on Biogas Technology for Poverty Reduction and Sustainable Development, jointly sponsored by the United Nations Economic and Social Commission for Asia and the Pacific (UNESCAP) and the Ministry of Agriculture of China (MOA) (18 to 20 October, 2005, Beijing). Utilisation of household biogas systems and large-scale biogas systems as a means to boost rural economy, while contributing to rural poverty reduction and sustainable development are discussed.

This link to Wikipedia provides information on cogeneration. There are many existing further links explaining the technologies of engine or generator types.