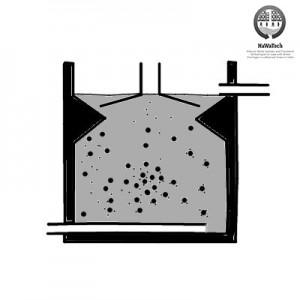 UASB maintains a high concentration of biomass through formation of highly settable microbial aggregates. Wastewater flows upwards through a blanket of flocculated biomass in a vertical reactor containing anaerobic bacteria, which break down carbonaceous organic matter. At the top of the reactor phase separation between gas-solid-liquid takes place. The process is suitable for both soluble wastes and those containing particulate matter. This technology is used as a primary treatment option and the effluent cannot be discharged directly without adequate post treatment.

Wastewater flows upwards through a blanket of flocculated biomass in a reactor containing anaerobic bacteria, which break down carbonaceous organic matter. The dimension of UASBs is calculated on the volume of sewage to be treated and the flow rate maintained in the reactor. For dilute wastes, the minimum HRT at average flow may be 6 to 12 h for wastes containing suspended organic matter. The average hydraulic over flow rate should not exceed 1 m/h for flocculent sludge and 3 m/h for granular sludge. The SRT in UASB varies between 15-30 days (CPHEEO 2012). The space requirement is 0.2-0.3 ha/MLD of installed capacity. Commonly used construction material is Reinforced Cement Concrete (KHALIL et al. 2008). The most preferred post treatment option for installed UASBs is Waste Stabilisation Ponds (WSP). For an organic loading of 1-2 kg COD/m3, the COD reduction efficiency would be in range of 50-70% (CPHEEO 2012). In the case of treatment of municipal sewage, the BOD of treated effluent could be expected to be 50 mg/l assuming the influent to be 200 mg/l.

It is estimated that about Rs. 2.5-3.6 million/MLD is required as capital cost. Approximately 65% of the total capital cost is of civil works and remaining 35% is for electrical and mechanical works. About Rs. 0.08-0.17 million/MLD/y are required as operation and maintenance costs, constituting 1% of the capital costs. Installation of UASB would require external finances. The financing of the UASB based Sewage Treatment Plants installed in India was by made by the Central Government of India.

The energy requirement is 10-15 KW/ML of sewage treated (NRCD 2009). Regular painting/coating of corrosion susceptible material/exposed surfaces is required. Furthermore, careful monitoring and control of the reactor sludge levels and sludge withdrawal is needed, as well as frequent cleaning or desludging of distribution or division boxes and influent pipes. The sludge production in UASB is well stabilised and dries directly on a sand bed. Removal of scum and floating materials from the settling zone needed. Prevent mixing of industrial effluents with toxic elements and sulphates or sulphites.

The energy requirement is 10-15 KW/ML of sewage treated (NRCD 2009). Regular painting/coating of corrosion susceptible material/exposed surfaces is required. Furthermore, careful monitoring and control of the reactor sludge levels and sludge withdrawal is needed, as well as frequent cleaning or desludging of distribution or division boxes and influent pipes. The sludge production in UASB is well stabilised and dries directly on a sand bed. Removal of scum and floating materials from the settling zone needed. Prevent mixing of industrial effluents with toxic elements and sulphates or sulphites.

Experiences in Europe and Other Cities of the World

UASBs to treat domestic sewage have been in operation under low temperature conditions in the Netherlands since 1976 (VAN VELSEN & WILDSCHUT 1988). A joint project financed by the Dutch Government was carried out in Cali (Colombia) to test the financial and technical feasibility of the UASB process for sewage treatment at pilot scale (SCHELLINKHOUT et al. 1985). In 1987, a demonstration UASB plant of 336 m3 was built in Senigallia (Italy) (URBINI et al. 1988). In 1990, a sewage treatment plant based on UASB was started up in Bacuramanga, Colombia with a capacity to treat 31,000 m3/d. In Odemira, southern Portugal, a 20 m3 demonstration plant was constructed under Portuguese-Dutch cooperation. Two stage UASB reactors were also applied to domestic sewage in Spain, which experienced COD reduction up to 62% at 14 h HRT. A pilot scale UASB reactor was operated in University of Tanzania, which attained 64% COD removal efficiency. Average removal efficiency of 74, 80 and 87% was obtained for COD, BOD and TSS respectively in a pilot UASB (for a community of 235 people) operating in Brazil. Three 1.2 m3 UASB was tested in Bandung, Indonesia. The treatment efficiencies were high due to high sludge stabilisation and high sludge hold up achieved (SEGHEZZO et al. 1998).

UASB technology was introduced in India in the late eighties during Ganga Action Plan (GAP). A set of pilot plants was installed at Kanpur for treatment of mixture of sewage and tannery effluents and later exclusively for sewage. Based on the limited experience of the two pilots at Kanpur, UASB was the most preferred technology option under Yamuna Action Plan (YAP), which was implemented during 1993-2002. Under this plan UASBs were installed across Delhi and the states of Uttar Pradesh and Haryana. At present, 23 full scale UASBs are in operation across India with a total installed capacity of 985 MLD (KHALIL et al. 2008). The largest UASB plant is in Agra, Uttar Pradesh (78 MLD). When the UASBs based Sewage Treatment Plants (STPs) were evaluated, none of them were complying with the discharge standards in terms of BOD, SS and FC removal.

UASB technology has been found to be very effective for treatment of high strength industrial effluents. However, when applied for sewage, the cumulative experience has shown that their “unique” features are not convincing for variety of reasons. UASB reactor requires second stage aerobic treatment to enable compliance with discharge standards. Under YAP-1, all UASBs were followed by FPUs of one-day retention for secondary treatment. This limited retention time minimised land requirement, but from treatment point of view it at best offered only removal of solids washed out of the reactor (SATO et al. 2006). Washout of sludge has been observed to be an operational problem as biogas resulting in instability of the reactor leading to deteriorations in the performance and very high BOD and suspended solids in the effluent (WSP 2008). Anaerobic bacterial culture is affected by a fluctuation of 3-5°C. Therefore biogas production has shown to go down in winters of North India. Performance of UASB based plants has been adversely affected by mixing industrial effluents that contain some toxic materials. There is a risk of corrosion of the engine parts as the biogas typically contains hydrogen sulphide. The dual fuel engines, which are installed due to their low cost, invariably require large quantity of diesel fuel as supplementary fuel. It makes no business sense to operate the dual fuel generators on externally purchased fuel. There have been cases of gas engines being taken off due to severe corrosion and desulphurisation plant being abandoned due to lack of required chemicals and resources. Another resource recovery option through the sale of sludge has found no takers (TARE & NEMA 2006).

The Central Public Health and Environmental Engineering Research Organisation (CPHEEO) manual on Sewage and Sewerage Management released in 2012 explicitly states that the use of UASBs shall be discontinued gradually over a period of time.

This manual is part A of the updated manuals on sewerage and sewage treatment, prepared by the Central Public Health and Environmental Engineering Organisation (CPHEEO), a department under the Ministry of Urban Development, India. These manuals aim at meeting the professional needs of practising engineers dealing with the sanitation sector in the country that focuses on achieving the goal of 'sanitation for all' within a reasonable timeframe. Part A of the manual is on Engineering aspects related to sewerage system.

UASB Technology For Sewage Treatment In India: Experience, Economic Evaluation And Its Potential In Other Developing Countries

UASB Technology For Sewage Treatment In India: Experience, Economic Evaluation And Its Potential In Other Developing Countries

This paper reviews the overall implications of UASB (Upflow Anaerobic Sludge Blanket) technology in India. Institutional and technical aspects with special reference to the Yamuna Action Plan (YAP) are presented. It also presents the potential of UASB technology in other developing countries with its future within India as well based on the evaluation of life cycle cost.

The government of India decided to launch a project to implement 16 full-scale Upflow Anaerobic Sludge Blanket (UASB) reactors (with a total capacity of 598,000 m3/d) in the Yamuna River basin under its Yamuna Action Plan (YAP). A polishing pond called the Final Polishing Unit (FPU) was utilized for post-treatment. This paper evaluates the sewage treatment efficiency of the combined system of full-scale UASB reactors and polishing ponds under Indian climatic conditions. Results have shown that the effluent from the sewage treatment plants (STPs) investigated failed to comply with applicable discharge standards in terms of BOD, SS, and fecal coliform removal. Therefore, it is proposed that such proper operation and maintenance as removing excess sludge and scum be conducted in order to increase treatment efficiency. Moreover, trained and experienced workers are also required to operate and maintain the systems, along with a scientific approach.

A Review: The Anaerobic Treatment of Sewage in UASB and EGSB Reactors

A Review: The Anaerobic Treatment of Sewage in UASB and EGSB Reactors

The anaerobic treatment process is increasingly recognized as the core method of an advanced technology for environmental protection and resource preservation and it represents, combined with other proper methods, a sustainable and appropriate wastewater treatment system for developing countries. Anaerobic treatment of sewage is increasingly attracting the attention of sanitary engineers and decision makers. It is being used successfully in tropical countries, and there are some encouraging results from subtropical and temperate regions. In this review paper, the main characteristics of anaerobic sewage treatment are summarized, with special emphasis on the upflow anaerobic sludge blanket (UASB) reactor. The application of the UASB process to the direct treatment of sewage is reviewed, with examples from Europe, Asia and the Americas. The UASB reactor appears today as a robust technology and is by far the most widely used high-rate anaerobic process for sewage treatment.