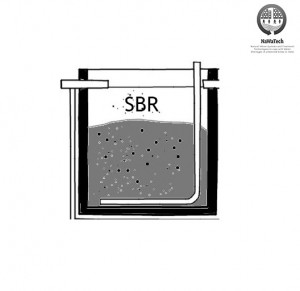 Activated sludge reactors are aerobic suspended-growth type processes. Large amounts of injected oxygen allow maintaining aerobic conditions and optimally mixing the active biomass with the wastewater to be treated. Activated sludge systems are highly efficient for organic matter and nutrient removal, though pathogen removal is low. In the view of reuse of the effluent in agriculture, it is not beneficial to remove all nutrients while standards for pathogen removal are barely met.

The Sequencing Batch Reactor (SBR) is a different configuration of the conventional activated sludge systems, in which the process can be operated in batches, where the different conditions are all achieved in the same reactor but at different times. The treatment consists of a cycle of five stages: fill, react, settle, draw and idle. During the reaction type, oxygen is added by an aeration system. During this phase, bacteria oxidise the organic matter just as in activated sludge systems. Thereafter, aeration is stopped to allow the sludge to settle. In the next step, the water and the sludge are separated by decantation and the clear layer (supernatant) is discharged from the reaction chamber (ASANO et al. 2007). Depending on the rate of sludge production, some sludge may also be purged. After a phase of idle, the tank is filled with a new batch of wastewater (UNEP and MURDOCH UNIVERSITY 2004). At least two tanks are needed for the batch mode of operation as continuous influent needs to be stored during the operation phase. Small systems may apply only one tank. In this case, the influent must either be retained in a pond or continuously discharged to the bottom of the tank in order not to disturb the settling, draw and idle phases. SBRs are suited to lower flows, because the size of each tank is determined by the volume of wastewater produced during the treatment period in the other tank (UNEP and MURDOCH UNIVERSITY 2004). Pollutants removal efficiency: BOD5: 95%, COD: 90%, TSS: 95%, Pathogen: N/A.

Mechanical equipment, such as pumps, aerates and mixers, require continuous maintenance and control, and supply of oxygen and sludge is essential (WSP 2008). Control of concentrations of sludge and oxygen levels in the aeration tanks is required and technical appliances (e.g. pH-meter, temperature, oxygen content, etc.) need to be maintained carefully. To make sure that optimal living conditions for the required bacteria are guaranteed and a satisfying effluent quality is met, the influent as well as the effluent should be supervised and controlled constantly (e.g. by a centralised computerised monitoring system).

Construction and maintenance costs are high as activated sludge treatment units are highly mechanised. Operation costs have been usually expensive due to the requirement of permanent professional operation, high electricity consumption (pumping and aeration) and costly mechanical parts (SANIMAS 2005), but in the last years the development of cheaper and more energy efficient equipment has reduced significantly the operational cost.

Fill-and-draw batch processes similar to the SBR are not a recent development as commonly thought. Between 1914 and 1920, several full-scale fill-and draw systems were in operation. Interest in SBRs was revived in the late 1950s and early 1960s, with the development of new equipment and technology. Improvements in aeration devices and controls have allowed SBRs to successfully compete with conventional activated sludge systems.

The Sequencing Batch Reactor (SBR) process has been successfully applied to more than 1,300 plants in the U.S., Canada, and Europe within the last 25 years. In particular, the number of SBR plants in North America is growing rapidly. Many of these facilities have been constructed for small communities, producing less than 4,500 m3/d of wastewater, although larger plants (up to 870,000 in Dublin, Ireland) have used SBR technology with similar effluent quality results (TOPRAK 2005).

Further examples of the compact design of the SBR process can be found in Bangkok, Thailand (average daily flow of 200,000 m3/d and peak flow of 500,000 m3/d) utilise tanks stacked on 4 levels to achieve a treatment plant footprint of 6,000 m2.

This informed choice catalogue for community based wastewater treatment technologies helps to identify suitable sanitation options and facilitates the assessment of different sanitation system components with regard to stakeholder preferences. A powerful tool for technical bottom-up planning giving overall information about technical options at a "glance".

Batch processes are not a new or innovative wastewater treatment technology, since the first reported fill/draw systems are at least a century old. The sequencing batch reactor (SBR) process has been successfully applied to more than 1,300 plants in the U.S., Canada, and Europe within the last 25 years. In particular, the number of SBR plants in North America is growing rapidly. Many of these facilities have been constructed for small communities, producing less than 1.0 million gallons per day (mgd) of wastewater, although larger plants (up to 230 mgd in Dublin, Ireland) have used SBR technology with similar effluent quality results. Both municipal and industrial wastewater has been successfully treated in SBR systems. A general overview of SBR reactor systems and the technology is presented here, along with a discussion of the additional enhancements of a hybrid SBR designed by Pacific Advanced Civil Engineering, Inc. (PACE) and constructed by Pacific Environmental Resources Corporation, Inc. (PERC). A real-world application using the PACE/PERC design is evaluated.

The mass of contaminants present in domestic and industrial wastewaters, in leachates, groundwaters, and in soils naturally varies with either time or space. These natural and sometimes severe variations are coupled with the uncertainties associated with direct exposure to the environment. In the face of such an unsteadystate behavior, facilities used for the removal of contaminants are often designed with the potentially unrealistic expectation that they can be operated as steady-state systems.

M/s.Magarpatta Township Development And Construction Co. Ltd has entrusted the prestigious job of Sewage Treatment Plant for their township with Sequential Batch Reactor technology for 3000 cu.m/day. The treated water is used for lake recharge and secondary uses.

This directory is part of UNEP collaboration with SIDS on the implementation of the Waste Management chapter of the Barbados Programme of Action. It focuses primarily on proven sound environmental technologies for solid, liquid and hazardous waste management plus those currently successfully being used in SIDS within the Caribbean Region.