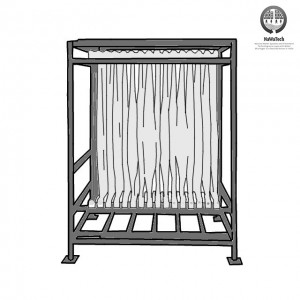 MBRs combine conventional biological treatment processes with membrane filtration to provide an advanced level of organic and suspended solids removal. The development of new polymeric membranes, cheaper and more resistant, together with less pressure requirements and higher permeate flow, has made the submerged membrane configuration in MBRs the most common, although it is also possible to use external membranes.

The Membrane Bioreactor (MBR) process (membrane activated sludge process) is an advanced wastewater treatment technology and constitutes a suspended growth activated sludge system, which instead of secondary clarifiers utilises low-pressure membranes for solid/liquid separation. As opposed to secondary clarification, the quality of solids separation is not dependent upon the mixed liquor suspended solids concentration, or the settling characteristic. Hence, the fact that MBRs can operate with much higher mixed liquor suspended solid concentrations, which provides an intensified biological process. Accordingly, the two major benefits of the MBR process are substantially reduced land and space requirements, and the reclamation of water (permeate) of excellent quality, which is a valuable source for higher demand reuse applications (LAHNSTEINER et al. 2007). There are five types of membrane configuration, which are currently in operation: Hollow fibre (HF), Spiral-wound, Plate-and-frame (i.e. flat sheet - FS), Pleated filter cartridge and Tubular. To provide optimal aeration and scour around the membranes, the mixed liquor is typically kept in the 1.0-1.2% solids range, which is 4 times that of a conventional plant. Pollutants removal efficiency: BOD5: 99%, COD: 95%, TSS: 99%, Pathogen: 99.99% (FITZGERALD 2008).

Most MBRs employ chemical maintenance cleaning on a weekly basis and recovery cleaning when filtration is no longer durable (once or twice per year). A deposit that cannot be removed by available methods of cleaning is called “irrecoverable fouling”. This fouling builds up over the years of operation and eventually determines the membrane lifetime (RADJENOVIC et al. 2008). All O&M tasks have to be done by skilled workers. Modern systems are maintained with chemicals, i.e. it is not necessary to remove the membranes from the membrane tank (KUBOTA 2010).

Although MBR capital and operational costs (membranes, oxygen utilisation, expert design, etc.) exceed the costs of conventional process, it seems that the upgrade of conventional process occurs even in cases when conventional treatment works well. This can be related to increase of water prices and the need for water reuse as well as with more stringent regulations on the effluent quality.

In Europe, the first full-scale MBR plant for treatment of municipal wastewater was constructed in Porlock (UK, commissioned in 1998, 3,800 PE), soon followed by Buechel and Roedingen WWTPs (Germany, 1999, resp. 1,000 and 3,000 PE), and Perthes-en-Gatinais WWTP (France, 1999, 4,500 PE). Only a few years later, in 2004, the largest MBR plant worldwide so far was commissioned to serve a population of 80,000 PE in Kaarst, Germany. The installations have thus grown from “small-size WWTPs” to “very large-size WWTPs” within only a few years (LESJEAN & HUISJES 2007).

The Manual on Sewerage and Sewage Treatment published by the Indian Ministry of Urban Development in 1993 (last update on 2012) emphasised conventional sewage treatment technologies such as Activated Sludge Process (ASP), Waste Stabilisation Pond (WSP), Upflow Anaerobic Sludge Blanket (UASB) Reactor, etc. Over the last two decades, many new technologies for sewerage and sewage treatment have emerged like membrane bioreactors. This technology, which is being used in other parts of the world, has not been deployed in India on a large scale until recently. Because of the advantages of the technology, the Jawaharlal Nehru National Urban Renewal Mission (JNNURM) has recently adopted the MBR technology as a suitable technology for the Indian conditions.

Some examples of MBR plants in India are:

This brochure of the MBR manufacturer KUBOTA gives an overview of how MBR systems work.

Article with case studies of Membrane Bioreactors in different countries.

A market survey of the European MBR industry was performed while contacting 33 suppliers or retailers of MBR filtration systems and/or MBR plant constructors. The study enabled to identify MBR plants constructed up to 2005: about 300 references of industrial applications (> 20 m3/d) and about 100 municipal wastewater treatment plants (WWTPs > 500 p.e.) were listed.

In this chapter, the authors have covered several aspects of MBR, with an exhaustive overview of its operational and biological performance. Different configurations and hydraulics of MBR are presented, with attention given to the fouling phenomenon and strategies for reducing it. Also, the high quality of MBR effluent is discussed, whereas in comparison with CAS removals of organic matter, ammonia, phosphorus, solids, bacteria and viruses are significantly enhanced.