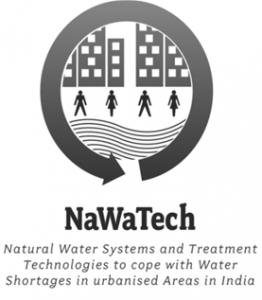 Anaerobic digestion is one of the most widely used processes for the stabilisation of wastewater treatment plant sludge. Due to its capacity to reduce the amount of organic matter up to 50%, anaerobic digestion represents a necessary step of sludge treatment prior to drying and incineration, optimising the post-treatment process and saving costs. Furthermore, the generated biogas with a high proportion of methane can be used as an energy source.

Anaerobic digestion is the biological degradation of organic matter in the absence of free oxygen. During this process, much of the organic matter is converted to biogas (methane, carbon dioxide and water) (CPHEEO 2012). Also known as methane fermentation or anaerobic sludge stabilisation, this process can reduce the organic matter content of sludge by 40 and 50 % (PETITPAIN 2013). Two different types in anaerobic sludge digestion process are in practice: (1) Low rate digestion: a large storage tank, occasionally, with some heating facility, and (2) High rate digestion: with pre-thickening of raw sludge, complete mixing, heating and uniform feeding of raw sludge (CPHEEO 2012). Sludge feeding or organic loading rate (OLR) is expressed in terms of volatile solids (VS). Typically, it is 0.5– 0.6 kg VS/m3/day for low rate digestion and 3.2–7.2 kg VS/m3/day for high load digestion (SURYAWANSHI et al. 2013). The retention time is usually about one month. The HRT and the extent of each of the three reactions occurring during anaerobic digestion (hydrolysis, acidogenesis and methanogenesis) are directly related (DE LA RUBIA et al. 2002). The process can either be thermophilic digestion, in which sludge is fermented in tanks at a temperature of 55°C or mesophilic, at a temperature of around 36°C. It can be designed with a batch or continuous configuration, in either one or two stages. The biodigester is an air and watertight structure that provides anaerobic conditions.

The O&M of an anaerobic digester requires a strict organisation and the continuous involvement of experts (SPUHLER 2013). There are many problems associated with its operation that should be given special attention (SURYAWANSHI et al. 2013): over-pumping of raw sludge, excessive withdrawal of the digested sludge, foaming, maintenance of an optimum/uniform temperature and inadequate mixing. In order to maintain optimal conditions for the microbial population to growth, nutrients (N and P) should be added in the form of ammonium chloride, aqueous ammonia, urea phosphate salts and phosphoric acid.

The capital requirements to install a digester vary depending on the design chosen, size and choice of equipment for utilisation of the biogas. The cost per unit volume installed increases for smaller treatment plants. Costs based on the price level in 2006 ranged from 250 USD/m3 (for a plant of capacity 200,000 PE) up to 1,000 USD/m3 (for 25,000 PE) (VAN HAANDEL & VAN DER LUBBE 2012). The annual O&M requirements include labour hours (skilled and unskilled), electrical energy, fuel energy as well as the annual materials and maintenance. Thermophilic processes require heating systems, increasing the O&M costs.

Anaerobic digesters to treat excess sludge were first implemented in Exeter, UK in 1885, and since then the technology and its benefits have been well known for more than 100 years (PETITPAIN 2013). Because of the incertitude linked to the use of the remaining sludge in agriculture, this treatment solution remained weak in the past decades meanwhile other technologies, such as sludge drying, incineration and gasification were preferred. Today, due to the increasing energy costs and the introduction of green electricity certification in countries such as Germany and Belgium, this technology is gaining terrain in Europe. In North America, anaerobic digestion is the dominant municipal sludge stabilisation technology (SCHAFER et al. 2002). The anaerobic digestion process has been generally used for WWTPs having wastewater flow less than 4,000 m3/day to more than 757,000 m3/day (GHAZY et al. 2011). Despite the fact that the production of electricity from the digested gas recovery becomes more cost effective for plants with daily flows greater than 38,000 m3/d, it is the preferable choice for WWTPs capacities less than 10,000 inhabitants in Germany (ATV-DVWK 2003). The company Degremont constructed numerous digesters during the past years; its most famous and largest facility is La Farfana in Santiago, Chile, with eight digesters of 15,000 m3 of capacity (PETITPAIN 2013).

In India, anaerobic digestion has been practiced for years using different substrates, including sewerage sludge. The “Manual on Sewerage and Sewage Treatment Part A: Engineering” published by the Central Public Health and Environmental Engineering Organisation (CPHEEO 2012) provides details regarding the recommended designs and technical aspects for the construction of anaerobic digesters in the country. According to this manual, anaerobic digestion is considered to be the preferred option under Indian conditions because “the process will generate methane and in turn electrical energy by burning it in gas engines, whereas the aerobic treatment will need pumping oxygen by means of aeration where electrical energy is expended. Anaerobic digestion requires the temperature to be in the range of above 25°C, which is of course available as the temperature of sewage almost throughout India and throughout almost the whole year” (CPHEEO 2012). In large wastewater treatment plants in India (>7,500 m3/day) the sludge management system generally recommended is to have a thickener, and a digester followed by a sludge drying arrangement as indicated below (ARCEIVALA & ASOLEKAR 2007): Various Sludges -> Thickener -> Anaerobic Digester -> Dewatering -> Disposal

“Digestion, as practised in India, is generally high-rate digestion done in cylindrical tanks of RCC (with depth-to-diameter ratios of 0.5-0.7) and conical bottoms. It mainly entails mixing of the digester contents using screw-pumps (with typical power inputs of 5-8 W/m3) for a short period after feeding of raw sludge and maintaining suitable temperatures in the mesophilic range (35°C). The heating of digester contents is not considered necessary in most parts of India. Generally, the volumetric capacity of digesters in India is of the order of 0.07-0.1 m3 per capita for sludge received from primary settling tanks mixed with excess activated sludge” (ARCEIVALA & ASOLEKAR 2007). According to the Central Pollution Control Board, most of the sludge-handling facilities in India are out of order. A report published by this organisation indicates that sludge removal, treatment and handling are the most neglected areas in STPs operation (CPCB 2007). An evaluation conducted in 2007 shows how sludge-handling facilities were non-operational in 43 STPs based on Activated Sludge Processes technology (or other high rate aeration systems). It was observed that in many cases there was no gas generation and utilisation, despite of having anaerobic digesters. In other cases, the gas was being flared and not utilised. Only in 12 STPs the gas generated was being utilised as domestic fuel (5 STPs) or as fuel for gas engine (4 STPs) or duel fuel generator DFG (3 STPs). The wastewater treatment plant in Okhka (Delhi) shows a successful case in sludge management in India (CPCB 2007). This plant, based on conventional activated sludge processes, has a capacity of 636 MLD. Here, out of 28 of sludge digesters, only one is not in operation. Part of the biogas produced is recycled for mixing with the help of compressors and the remaining biogas is supplied to nearby areas through pipelines and used as domestic fuel gas. An average of 14,000 m3 of biogas is produced per day at the STP, which is fully utilised as domestic fuel through 3,500 of connections. The CPCB recommends the implementation of anaerobic digestion for the treatment of sludge, as these projects can be financed through CDM (Clean Development Mechanism) (CPCB 2007). “Projects based on generation of electric power from biogas, which is being produced as a result of digestion of sludge in STPs, are eligible for CDM, as it will help in reducing and stabilising the emissions due to methane, which is a greenhouse gas. Based on the potential of biogas/power generation from STPs, expenditure on O&M can be offset by earning ‘carbon credits’ on recurring basis and it can be a perennial source of revenue generation” (CPCB 2007).

The last edition of this successful book dealt with disposal of wastewater for pollution control. The current edition, Wastewater Treatment for Pollution Control and Reuse has been thoroughly revised and extends the discussion to the many benefits and various methods for reusing wastewater. New chapters on reuse of wastewater and use of physico-chemical treatment methods, including membrane technologies that are critical for reuse, have been added.

This Advisory leaflet prepared by the ATV-DVWK Specialist Committee AK-2 and its Working Group AK-2.1 deals with the biological stabilisation of sewage sludge and the effort to reduce stabilisation volume and time.

Evaluation of Operation and Maintenance of Sewage Treatment Plants in India

Evaluation of Operation and Maintenance of Sewage Treatment Plants in India

This study is the outcome of visits of STPs in India and includes first hand information, technical and management aspects and the functioning of the STPs.

This manual is part A of the updated manuals on sewerage and sewage treatment, prepared by the Central Public Health and Environmental Engineering Organisation (CPHEEO), a department under the Ministry of Urban Development, India. These manuals aim at meeting the professional needs of practising engineers dealing with the sanitation sector in the country that focuses on achieving the goal of 'sanitation for all' within a reasonable timeframe. Part A of the manual is on Engineering aspects related to sewerage system.

In this study the performance of mesophilic and thermophilic anaerobic digestion of sludge at pilot-scale, have been presented.

The main objectives of this study are to evaluate and compare the application of aerobic/anaerobic digestion, natural/mechanical dewatering and composting processes in sewage sludge treatment options in Egypt with respect to various parameters including energy balance, environmental impacts, sludge capacities and economic aspects. Moreover, the area of application of each treatment process, according to the Egyptian conditions, is evaluated.

Article about municipal sludge digestion with a special focus on the digesters constructed by the french company Degremont.

This article focuses on the right operating procedure of anaerobic digesters for a successful use of the system.

The scope of this comprehensive new edition of Handbook of Biological Wastewater Treatment ranges from the design of the activated sludge system, final settlers, auxiliary units (sludge thickeners and digesters) to pre-treatment units such as primary settlers and UASB reactors. The core of the book deals with the optimized design of biological and chemical nutrient removal. The book presents the state-of-the-art theory concerning the various aspects of the activated sludge system and develops procedures for optimized cost-based design and operation. It offers a truly integrated cost-based design method that can be easily implemented in spreadsheets and adapted to the particular needs of the user.