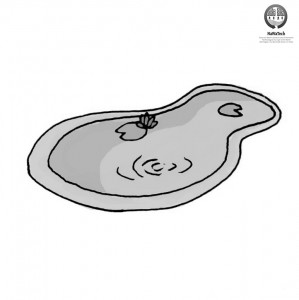 Retention basins are predominantly used for storm water control and treatment. Rainwater is stored in a pond, which further filters through the sediments and soil column and in the process recharges the aquifer. The retention basin prevents successional flooding by storing the water in a confined area. Due to the flow of water through the soil water gets treated naturally before reaching the aquifer. Water from the retention basin can be used in irrigation, industry or at household level after an appropriate secondary treatment. Nutrients are removed effectively because of the photosynthetic activities and bacteria attached to the plants.

Advantages
Design is simple.
Collection and improvement of water quality at the same time.
Natural process with no energy and no advanced instruments required.
Improved storm water management and flood control.
New habitat can be created.
Disadvantages
High land requirements.
Has a drowning danger for children.
If not designed correctly, negative impacts on water quality can occur.
Not applicable in areas with low precipitation and highly permeable soil.
Factsheet Block Title
Design and Construction Principles
Factsheet Block Body
Retention Basin
The design of a retention basin is unique to the individual site, as integration to the surrounding environment is required. The criteria for site selection is based on the availability of land and its cost, as well as the water holding capacity of the soil and ability to support pond environment. Site-specific constraints for construction of retention basins may include impact on the environment, relocation of utilities lines like pipelines and electric supply lines and type of bed rock. The construction of a retention basin is effective in an area where storm water can naturally flow and be collected in the basin. Modifications to retention basins could be done by planting native aquatic vegetation to improve its functioning. The hydraulic conductivity is another important technical design parameter for constructing the retention basin. A low hydraulic conductivity restricts percolation of water to the aquifer, while high hydraulic conductivity does not allow for retention of water in the basin. The hydraulic loading rate in a retention basin is a function of the hydraulic conductivity and infiltration rate. The under laying soils and bed rock should have a permeability between 10-5 and 10-6 cm/s to retain water in the retention basin (EPA 1999). In case of a soil with high hydraulic conductivity, a clay blanket may be overlaid (EPA 1999). Retention ponds need to hold back a constant level of water. Retention basins filter pollutants such as metals, nutrients, sediments, or organics by sedimentation. Further removal of pollutants is achieved through algal and wetland plant uptake as well as bacterial decomposition (EPA 1999).
Factsheet Block Title
Operation and Maintenance
Factsheet Block Body

Retention basins require limited maintenance. Permanent access must be provided to the embankment areas for preventive maintenance, which includes control of erosion and suspension of sediments. This should be done to reduce unwanted sediment export. The routine maintenance includes quarterly inspections of inlet and outlets, sediments, trash dredging, repairs to the embankment, control of algal growth, insects and dour (SEWRPC 1991). The retention basin should be inspected after every storm.

A retention basin is used to manage storm water to prevent flooding, soil erosion and control transport of pollutants carried by rainfall runoff. It is an artificial lake designed to carry a permanent pool of water. Retention basins have been extensively studied in the US, Canada, South-East Asia and parts of Europe (SEWRPC 1991; BORDEN et al. 1996; SAUNDERS & GILROY 1997; WAKELIN et al. 2003). Along the Czech Republic – Germany border the implementation of retention basin reduced storm water runoff peak flows by up to 48% (REINHARDT 2012). In recent years, there has been increased focus on optimising the design of retention basins for the purpose of maximising cost savings. Studies have also been carried out in Germany to assess the ecological impact of retention basins (REINHARDT 2012). Along with the improvements in the water quality and habitat, the adverse impact of change in the hydrological conditions resulted in the modification of the vegetation in the region (SCHOLZ 2007).

Retention basins offer a viable solution to the problem of urban storm water runoff in developing countries. Due to financial constraints and lack of infrastructure, wastewater management systems are not well equipped to treat sudden increase in hydraulic load due to rain or floods. Retention basins offer an inexpensive and sustainable drainage solution to this problem. Studies show that incorporating retention basins to conventional drainage networks can prevent flooding in receiving bodies and transport of oil, organics and toxic metals through storm water runoff (CIDCO 2013). Retention basins or holding ponds have been constructed in coastal Navi Mumbai to avoid water logging of low lying areas and prevent pollutants to flow into the creek (CIDCO 2013). In Mumbai, retention basin was effective in storm water flooding and reducing the total suspended solids (ZOPE & SAWANT 2008).

In rural India, retention basins have been used for centuries for holding rainfall to augment drinking water and irrigation supply. Case studies have been reported from various parts of India including Hyderabad, Surat and Karnataka (NIDM 2009). These local initiatives have been successful in preventing flooding in areas with heavy rainfall and preventing water scarcity in desert areas.

Evaluation of Ponds and Wetlands for Protection of Public Water Supplies

45% of Navi Mumbai's land has been set aside for greenery and open-to-sky uses. As a custodian of this land, CIDCO has always been vigilant about protecting this greenery. Soon after its inception, CIDCO established a full-fledged Horticulture Department for development of the 'greens' in Navi Mumbai. The very objective of this was to convert and cover the barren hills and low-lying lands into a green and sustainable human settlement.

Ecological Effects of Water Retention in the River Rhine Valley

Ecological Effects of Water Retention in the River Rhine Valley

This review paper summarizes the ecological effects of the use of floodplains and flood retention basins to control river flow in the River Rhine (Rhein) valley. Early River Rhine regulation strategies including channel straightening are assessed. The subsequent disappearance of alluvial hardwood forests has been highlighted as the major disadvantage. The response of trees to more recent strategies such as ecological flooding is also assessed. Water quality and habitat improvements due to these ecological control techniques are identified as effective. The development of flood retention basin classification methodologies and floodplain management decision support systems particularly for the upper River Rhine Valley is recommended. The purpose is to aid communication among engineers and scientists, and to promote a holistic, integrated and international water resources management strategy, which would be relevant not only for the River Rhine valley but also for similar rivers in a temperate climate.

The water quality behaviour of 58 stormwater retention basins in Winnipeg, Canada, was intensively studied during a 5-month summer period (May to September). Dissolved oxygen (DO), temperature, turbidity, transparency and depth were measured onsite. Samples analyzed in the laboratory included: total suspended solids (TSS), pH, chlorophyll a, fecal coliforms (FC), total kjeldahl nitrogen (TKN), ammonia, nitrate, total phosphorus (TP) and orthophosphate. Results showed that increases in TSS and turbidity resulted from increased chlorophyll a concentrations associated with algal growth. TKN increases were partly the result of nitrogen incorporation into proteinaceous material in the algal cells. Ammonia concentrations showed a maximum attributed to chemo-heterotrophic degradation of dead biomass. Orthophosphate made up 30% to 50% of the total phosphorus present and the two followed the same general trends. Temperature increased and then decreased over the summer months with no apparent thermal stratification. After starting the summer with no dis-solved oxygen gradient between top and bottom, depletion of the dissolved oxygen at the bottom of the basins during the latter half of the summer was attributed to chemoheterotrophic degradation of dead biomass. Finally, sub-stantial counts of fecal coliform bacteria occurred in the basins in response to Canada geese migration.

Water pollution degrades surface waters making them unsafe for drinking, fishing, swimming, and other activities. As authorized by the Clean Water Act, the National Pollutant Discharge Elimination System (NPDES) permit program controls water pollution by regulating point sources that discharge pollutants into waters of the United States. Point sources are discrete conveyances such as pipes or man-made ditches. Individual homes that are connected to a municipal system, use a septic system, or do not have a surface discharge do not need an NPDES permit; however, industrial, municipal, and other facilities must obtain permits if their discharges go directly to surface waters. In most cases, the NPDES permit program is administered by authorized states. Since its introduction in 1972, the NPDES permit program is responsible for significant improvements to our Nation's water quality.

Stay up to date about new perspectives, factsheets and more.