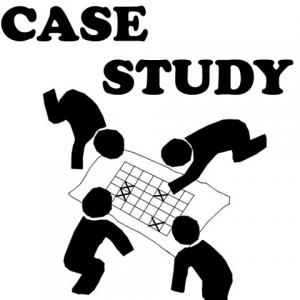 One of the two ponds constructed in Bokenäs. Source: JENSSEN (2012)

Bokenäs is Volvo´s recreation and conference centre. The centre was expanded and modernised in 1990 and a source separating sanitary system was installed in order to meet the strict discharge limits set by Udevalla municipality. The toilet waste is collected using low flush (2/4 liter) gravity toilets (see also low flush toilets) and co-composted anaerobically with organic household waste to yield biogas (see also composting small scale). During the first years, production of struvite of MAP (magnesium-ammonium-phophate) was pioneered. Despite successful production of MAP, they discontinued this due to a very labour-intensive process. Today, the biogas effluent is treated by chemical precipitation to remove phosphorus and organic matter prior to merging it with greywater. The greywater and the effluent from the biogas reactor is treated in a beautifully landscaped natural system consisting of a biofilter, two ponds in series, an algae filter made of sand, and a constructed wetland prior to the discharge into the fjord (see also semi-centralised wastewater treatment). In Bokenäs, some of the treated wastewater is recycled for toilet flushing.

Webpage of Volvo´s recreation and conference centre. The centre was expanded and modernised in 1990 and installed a source separating sanitary system in order to meet the strict discharge limits set by Udevalla municipality.