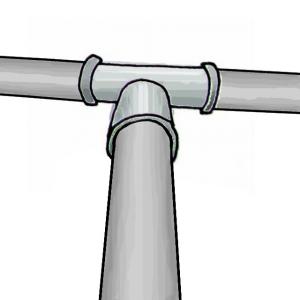 A water pipe is any pipe or tube designed to transport drinking water to consumers. If the water is treated before distribution or at the point of use (POU) depends on the context. In well planned and designed water distribution networks, water is generally treated before distribution and sometimes also chlorinated, in order to prevent recontamination on the way to the end user. The varieties of water pipes include large diameter main pipes, which supply entire towns, smaller branch lines that supply a street or group of buildings, or small diameter pipes located within individual buildings. Water pipes can range in size from giant mains of up to 3.65 m in diameter to small 12.7 mm pipes used to feed individual outlets within a building. Materials commonly used to construct water pipes include polyvinyl chloride (PVC), cast iron, copper, steel and in older systems concrete or fired clay. Joining individual water pipe lengths to make up extended runs is possible with flange, nipple, compression or soldered joints (SCOTT 2011).

Steel pipes are comparatively expensive, but they are the strongest and most durable of all water supply pipes. They can withstand high water pressure, come in convenient (longer) lengths than most other pipes and thus incur lower installation/transportation costs. They can also be easily welded (LEE n.y.).

Galvanised steel or iron is the traditional piping material in the plumbing industry for the conveyance of water and wastewater. Although still used throughout the world, its popularity is declining. The use of galvanised steel or iron as a conveyer for drinking water is problematic where water flow is slow or static for periods of time because it causes rust from internal corrosion. Galvanised steel or iron piping may also give an unpalatable taste and smell to the water conveyed under corrosive conditions (WHO 2006).

Cast iron pipes are quite stable and well suited for high water pressure. However, cast iron pipes are heavy, which makes them unsuitable for inaccessible places due to transportation problems. In addition, due to their weight they generally come in short lengths increasing costs for layout and jointing.

Concrete cement pipes are expensive but non-corrosive by nature. Their advantage is that they are extremely strong and durable. However, being bulky and heavy, they are harder and more costly to handle, install and transport (LEE n.y.).

PVC pipes are non-corrosive, extremely light and thus easy to handle and transport. Still, they are strong and come in long lengths that lower installation/transportation costs (LEE n.y.). However, they are prone to physical damage if exposed overground and become brittle when exposed to ultraviolet light. In addition to the problems associated with the expansion and contraction of PVC, the material will soften and deform if exposed to temperatures over 65 °C (WHO 2006).

A leaking distribution system increases the likelihood of safe water leaving the source or treatment facility becoming contaminated before reaching the consumer. Moreover, leaking can result in considerable water loss on the way to the end-user (also see the factsheet on leakage control). The distribution system must be designed, managed and maintained to guarantee a minimal level of leakage. The internal pipe pressure constantly must be greater than the external hydrostatic pressure. This will ensure the delivery of the water reducing loss from leaks and minimising excess growth of pathogenic microorganisms. A certain level of free residual chlorine or chloramine disinfectant will reduce the risks of recontamination within the distribution system (see also chlorination). Inflows of contaminated water during distribution are major sources of waterborne pathogens and thus cause of waterborne diseases (WHO 2006).

Water pipes are often made of copper and bath fixtures may be made from alloys containing copper (brass, bronze). The U.S. Environmental Protection Agency (EPA) has established a Maximum Contaminant Level Goal (MCLG) for copper in public drinking water systems at 1300 parts per billion (ppb). MCLGs are non-enforceable health standards for drinking water. The principal source of copper in drinking water results from the leaching of copper from pipes and bath fixtures due to corrosive (acidic) water. The blue-green stain left in some bath fixtures is a sign of the presence of copper in water. Usually, excess copper in drinking water comes from the leaching of the plumbing system into the water that has been sitting in the pipes for several hours. Therefore, letting the water run for 30 to 60 seconds before using it for drinking or cooking will often significantly reduce copper levels (DES 2005).

Water pipes are required almost everywhere, especially for drinking water distribution. The most robust and durable type of water pipes is probably made from cement. Due to their heavy weight they are however difficult and expensive to install. PVC pipes are easier to install and much lighter, and thus particularly suited for remote areas that are difficult to access.

What is a Water Pipe?

In the Pipeline: Water for the Poor Investing in small piped Water Networks

In the Pipeline: Water for the Poor Investing in small piped Water Networks

This tool kit is intended to be used as a guide for governments, development agencies, utilities, and civil society in putting up or implementing piped water projects using the Small Piped Water Network concept for urban poor or rural communities without access to piped water systems.

This review looks at the factors affecting the presence and growth of microorganisms in piped networks, and the practices of water supply organisations that can directly or indirectly influence their presence and growth. This review is intended for policymakers but it is also relevant to engineers and scientists responsible for water supply planning, operations and monitoring.

This Guide is an abbreviated compilation of the wide range of scientific, engineering, health and operational issues concerned with the control of lead in drinking water in small water supply systems. It explains why lead in drinking water may still be a threat to public health in small communities. It is aimed at Local Health Officials and the operators of drinking water supply systems that serve small communities. Its objectives are to raise awareness, to provide a basis for assessing the extent of problems, and to identify control options.