Carbon credits - an instrument for smart subsidies and blended finance 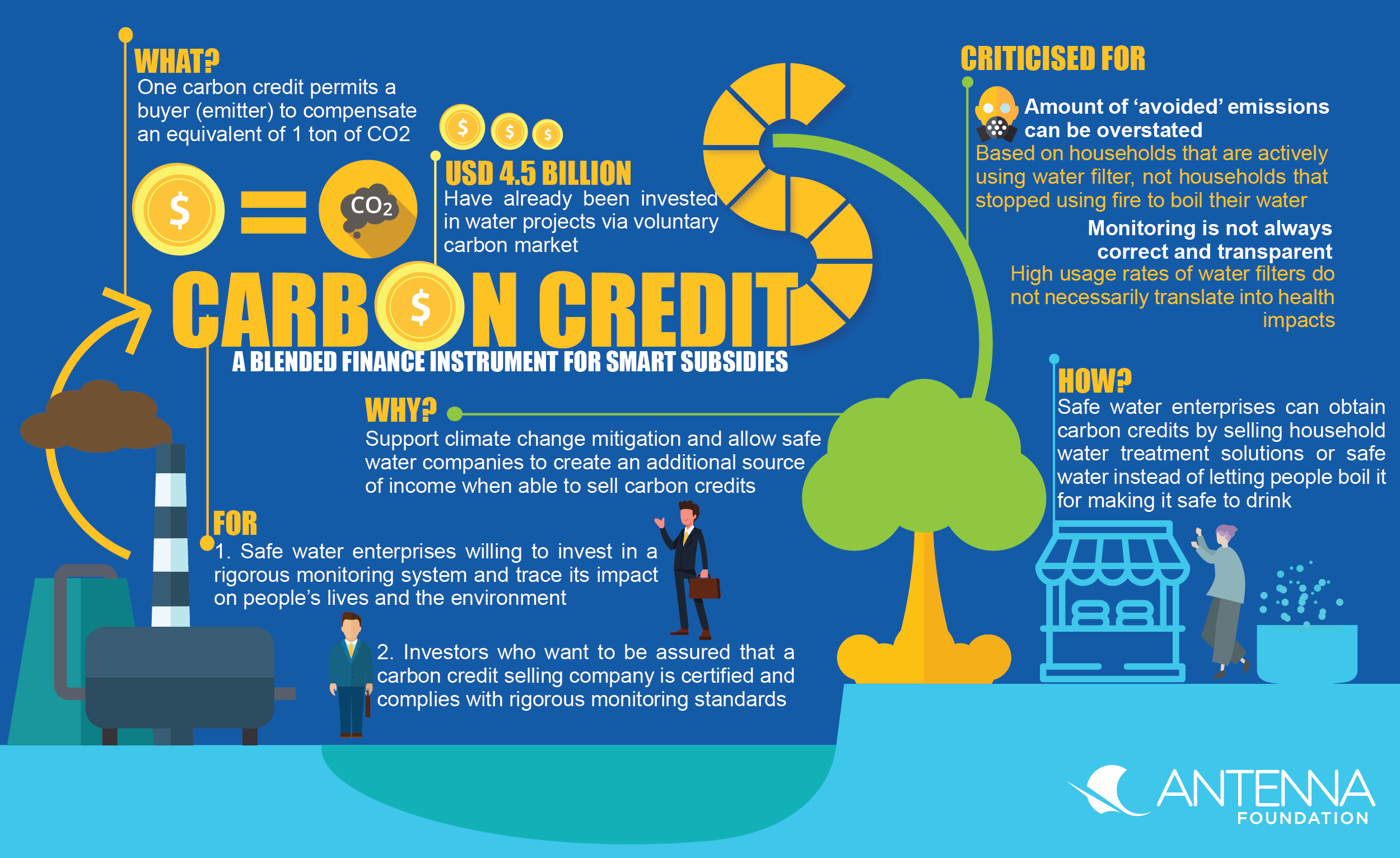 Carbon credits are a tradable commodity that allows an emitter to compensate carbon emissions equivalent to 1 ton of carbon dioxide (CO2). Safe water enterprises can obtain carbon credits by monitoring and certifying the positive environmental impact of a safe water project in terms of CO2 reduction by using a household water treatment solution (HWTS) or selling safe water instead of boiling to make water safe to drink.

The case study about Hydrologic in Cambodia provides various insights on the procedure of certifying and monitoring the CO2 reduction within a for-profit safe water project.

What are carbon credits?

Carbon credits are a market-based method and tradable commodity to compensate carbon emissions and are traded on different carbon markets. Specifically have carbon finance and carbon credit systems been introduced to permit emitters (polluting countries, industries, companies or individuals) compensate their (over-)emission and/ or mitigate climate change. One carbon credit permits a buyer (emitter) to emit an equivalent of 1 ton of CO2. About USD 4.5 billion have already been invested in water projects via the voluntary carbon market (HAMRICK & GOLDSTEIN, 2015). These credits are created through certified innovative projects (e.g. Hydrologic in Cambodia) and traded in different voluntary carbon markets. The voluntary carbon schemes are different from the “official” carbon market, which is linked to the official compliance schemes under the Kyoto Protocol where states ratified certain levels of emissions that should not be surpassed (CLIMATECORPORATION, n.y.; HAMRICK & GOLDSTEIN, 2016). The carbon credits of the official carbon market are created through projects that are nationally approved and have undergone the verification and registration process of the UNFCCC (United Nations Framework Convention on Climate Change). Both schemes have been created in an attempt to sustainably mitigate greenhouse gas emissions (such as CO2) globally. For more information please visit Climatecorp or Carbon Solutions Global.

Why are carbon credits relevant for safe water enterprises?

But there is also criticism on water carbon projects:

Carbon credit mechanisms for water in general have been criticised by a number of people (PICKERING ET AL., 2016; STARR, 2011; YEO, 2013). Two main points that are mentioned are:

Stay up to date about water entrepreneurship!

For whom are carbon credits interesting?

Carbon credits are interesting for safe water enterprises that are willing to invest in a rigorous monitoring system and trace its impact on people’s lives and the environment. In the long-term the sales of carbon credits will help a safe water company to have a steady income stream for subsidizing company activities and/or expansion.

Carbon credit accredited safe water companies have also an advantage to show a mature level of monitoring to investors. Investors on the other hand are assured that a carbon credit selling company is certified and complies with rigorous monitoring standards.

How can carbon credits be obtained for the voluntary carbon market?

To sell carbon credits on the voluntary market, a project needs to be certified by an international certification body, like the Gold Standard or VCS Standard among others. This requires an extensive monitoring process in which an enterprise proofs and quantifies how many tons of CO2 have been reduced by a specific project through the use of water filters, chlorine and other HWTS in comparison to make water safe for drinking through boiling (e.g. on a fire) (SUMMERS ET AL., 2015).

The case study from Hydrologic in Cambodia provides various insights on the procedure of certifying and monitoring the CO2 reduction within a for-profit safe water project.

Ahead of the Curve - State of the Voluntary Carbon Markets 2015

Ahead of the Curve - State of the Voluntary Carbon Markets 2015

Climate and Health Co-Benefits in Low-Income Countries: A Case Study of Carbon Financed Water Filters in Kenya and a Call for Independent Monitoring

Climate and Health Co-Benefits in Low-Income Countries: A Case Study of Carbon Financed Water Filters in Kenya and a Call for Independent Monitoring

Thirty Million Dollars, a Little Bit of Carbon, and a Lot of Hot Air

Thirty Million Dollars, a Little Bit of Carbon, and a Lot of Hot Air

CO2 and H2O: Understanding Different Stakeholder Perspectives on the Use of Carbon Credits to Finance Household Water Treatment Projects

CO2 and H2O: Understanding Different Stakeholder Perspectives on the Use of Carbon Credits to Finance Household Water Treatment Projects