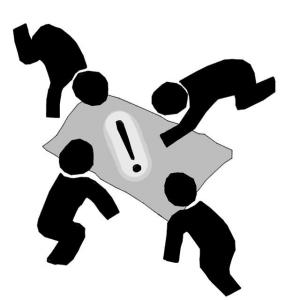 The City Sanitation Task Force (CSTF) is a multi-stakeholder platform comprising representatives from different sectors of society, including agencies directly responsible for sanitation (divisions and departments of the ULB, PHED, etc.), agencies indirectly involved or impacted, eminent persons, practitioners, representatives of the different stakeholders sectors, NGOs and sanitary workers. GIZ and partners supported the Municipal Corporations of 6 selected cities to launch the City Sanitation Plan Process, including the formation of the CSTF. The following factsheet presents the key considerations and processes followed at the time of formation and following-up of the CSTF.

Identification of Members of the City Sanitation Task Force (CSTF)

According to the National Urban Sanitation Policy each city should constitute a multi-stakeholder platform comprising different representatives such as (adapted from MOUD 2008):

GIZ in its efforts of launching the City Sanitation Plan Preparation in Shimla, Varanasi, Nashik, Raipur, Kochi and Tirupati supported the formation of the CSTF at the beginning of the process (see also case studies Raipur and Kochi). A GIZ environmental cell in each city was created within the Municipalities and consulting agencies were contracted to give technical support to the ULBs, i.e. the Consortium for DEWATS Dissemination Society (CDD) for Shimla, Varanasi and Raipur and ICRA Management Consulting Services Ltd. (IMaCS) for Nashik, Kochi and Tirupati. According to the methodology agreed, the consultants had to establish a first contact with the representatives of the city, building the needed trust to guide the ULB throughout the process. GIZ together with the group of experts supported the ULB during identification of relevant stakeholders to participate in the CSTF. This was carried out by the definition of the roles and responsibilities that each CSTF's member would have, the agenda and the profile of institution needed to activate the CSTF.

Formation and Dynamics of the City Sanitation Task Force (CSTF)

Serving as an opportunity for sharing knowledge and communicate expectations, GIZ organised a set of meetings with the consultants and environmental cells during the process of preparation of CSP. These workshops helped to communicate the guiding principles that should be kept in mind to come up with a CSP in line with the interests of the stakeholders and that also could present feasible solutions for the problems. One of the main important aspects clarified was the need to create ownership of the CSP within the ULB and the CSTF. It is the responsibility of the ULB (the Mayor, the Commissioner and the relevant stakeholders) to carry the CSP forward and the consultants should be seen only as a catalyst in this process. In this framework, the CSTF was and still is expected to play a crucial role in all stages of the project.

A first CSTF meeting was then carried out in the selected cities with the aim of kicking-off the campaign “100% Sanitised city”. These meeting brought together the identified stakeholders to take a formal resolution to work together in line of the goal of the NUSP. Guided by the consultants, the groups developed their vision (see also visioning) of how would be the city in a given period of time, describing the aspirations of all different stakeholders. It was then recognised that participation and consultation would allow to direct the actions based on the real needs and what the stakeholder would expect from outcomes (see also decision making and stakeholder importance and influence).

The methodology to prepare the CSPs was also shared and discussed with the different CSTFs, identifying the role and their responsibilities of the task force.

The CSTF gathered in different meetings during the process of preparation of the CSP. They served as a monitoring and backstopping entity, providing information during the baseline data collection (see preparation of status report), revising and approving the status reports and the final CSP (see analysis of the information and planning) and defining operational frameworks for the implementation of the CSP.

According to the NUSP, the City Sanitation Task Force will be responsible for:

An Implementation Agency appointed by the CSTF

The Task Force should appoint one of the key agencies, preferably the ULB, to become the City Sanitation Implementing Agency for the CSP for the city. This agency will be responsible for day-to-day coordination, management and implementation of the sanitation programmes on a city-wide basis. The agency will coordinate with and agree on joint actions with other public agencies, and contract in and supervise the services of NGOs (through Memorandum of Understanding) and private parties (through contracts) for preparing and disseminating materials for information, education and communication (see also creating information material), conducting baseline surveys (e.g. baseline data collection) and stakeholder consultations (see also decision making), maintaining a comprehensive GIS-based database, implementing physical works, letting out and supervising O&M management contracts, etc.

The Sanitation Task Force will recommend the assigning of permanent responsibilities for city-wide sanitation to the ULB including the following aspects:

Report of the City Level Consultation Workshop for the Preparation of City Sanitation Plans for selected JNNURM and UIDSSMT Cities. 15th and 16th April 2010 at Woodrose Club, Bangalore

Report of the City Level Consultation Workshop for the Preparation of City Sanitation Plans for selected JNNURM and UIDSSMT Cities. 15th and 16th April 2010 at Woodrose Club, Bangalore

This report presents the discussions that took place in the first consultation workshop organised by GIZ, consultants and other stakeholders. References regarding the formation of the CSTF can be found in more detail.

This is the web page of the Ministry of Urban Development of the Government of India. This section, completely devoted to preparation of CSP offers a set of presentations, in which different agencies show the methodology for the constitution of the CSTF.