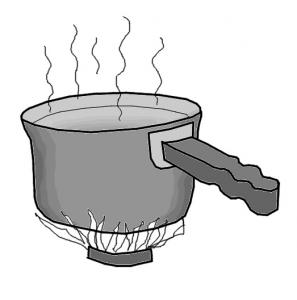 Boiling drinking water with fuel is the oldest and most commonly practiced household water treatment method. According to WHO, water needs to be heated until the appearance of the first big bubbles to ensure that it is pathogen free. Many organizations recommend boiling both for water treatment in developing countries and to provide safe drinking water in emergency situations throughout the world - though it is quite laborious and uses a lot of energy. Boiling only kills pathogens and does not remove turbidity or chemical pollution (e.g. arsenic) from drinking water. So prior to boiling, water can be purified by settling or filtration method.

Advantages
Effectively kills most pathogens.
Easy, simple and widely accepted method of disinfection (particularly in tea-consuming cultures)
Biogas cooking stoves can be used for the cooking stove (e.g. biogas linked toilet)
Disadvantages
Can be costly due to fuel consumptions
Use of traditional fuel (firewood, kerosene/gas) contributes to deforestation and indoor air pollution
Potential user taste objections
Risk of injuries (especially when children are around)
Does not remove turbidity, chemicals, taste, smell, colour
Time consuming
Water needs to cool down before use unless for hot drinks

Boiling is oldest and most effective household drinking water treatment. It is promoted in both developing countries where water is routinely of uncertain microbial quality and in developed countries when conventional water treatment fails or water supplies are interrupted as a result of disasters or other emergencies. 21.2% of the population in South-east Asia report boiling their water before drinking it (ROSA & CLASEN, Unpublished data, 2008).

The WHO recommends bringing water to a rolling boil as an indication that a disinfection temperature has been achieved (WHO 2008). If practised correctly, boiling is one of the most effective water treatment methods to kill or deactivate all classes of waterborne pathogens, including bacterial spores and protozoan cysts that have shown resistance to chemical disinfection and viruses that are too small to be mechanically removed by microfiltration (BLOCK 2001). Heating water to even 55 °C has been shown to kill or inactivate most pathogenic bacteria, viruses, helminths and protozoa that are commonly water borne (FEACHEM et al. 1983).

A clean container should be used for the boiling and after boiling, water should be stored in a clean and covered container, and handled carefully (no utensils should be brought in contact with the water, thus water needs to be poured in another clean recipient for consumption) to minimise the recontamination.

Despite its effectiveness and simplicity, boiling has the disadvantage to require affordable and sufficient fuel to have properly boiled water for a regular drinking purpose, and is quite labour intensive.

If the boiling point is reached, boiling is effective in killing bacteria, viruses, protozoa, helminths and most pathogens from drinking water. Incomplete inactivation of pathogens in boiled water is attributed to users not heating the water to the boiling point and/or recontamination of boiled water in storage.Boiling does not remove turbidity, chemicals (e.g. arsenic), taste, smell or colour from water. Therefore, settling or even filtration (by cloth or slow sand or biosand filter) is often needed prior to boiling.

Summary of treatment efficiency of boiling. Source: adapted from CAWST (2009)

Chemical pollution such as arsenic is not removed by boiling. Also water with high amounts iron (with reddish colour), calcium or chlorine is not suitable for boiling. White scales may deposit in container bottom after boiling if calcium is high in waters. In such case, the container should be washed properly after every use. Boiled water tastes flat and people may not like that. Thus, boiled water can be chilled in freezer or cooled down to room temperature to have good taste.

Boiling is suitable where enough fuel sources (e.g. wood, kerosene, electricity, gas, charcoal etc.) are locally available all the time in affordable cost. Especially in densely populated areas, boiling with fuel wood is not appropriate to the overexploitation of the wood resources and the subsequent environmental damage such as desertification and soil erosion. Boiled water may cause burn injuries if not handled properly. Long term exposure in fire or stove smoke of the person boiling the water may cause associated respiratory diseases. For this indoor cooking space should be made well ventilated.

Sanitation and disease. Health aspects of excreta and wastewater management

A 3-page factsheet on water boiling, focussing on treatment efficiency, operating criteria and other information on boiling.

A single page factsheet with descriptions from the field and the lab. Describes effectiveness, advantages and limitations of boiling.

This booklet on water gives examples of innovations such as the use of sunlight to purify water, effective low-cost water filters, low-cost drip irrigation and locally produced hand pumps that are five times cheaper than imported pumps.

This booklet, part of the Smart Water Solutions series provides a wide range of methods and products for home water treatment in rural areas.

This Technical Brief is the first of two examining the treatment of water in the home. The subject is introduced, and treatment by straining, storage, settlement, solar disinfection, chemical disinfection, and boiling are covered.

The Latin American and Caribbean countries have seen growing pressure on water resources, with increasing demand and costs, for agricultural, domestic and industrial consumption. This has brought about the need to maximize and augment the use of existing or unexploited sources of freshwater. There are many modern and traditional alternative technologies for improving the utility and augmenting the supply of water being employed in various countries, but with limited application elsewhere due to the lack of information transfer among water resources managers and planners. This book was prepared to provide water resource managers and planners, especially in developing countries and in countries with economies in transition, with information on the range of technologies that have been developed and used in the various countries throughout the world.

This practical guide provides a review of different processing techniques and adequate water conservation at home and is structured around 10 key questions that should be posed before choosing a suitable solution.

This study documents the drinking water response, including the role played by household water treatment after the Indian Ocean Tsunami.

This report examines the evidence to date regarding the scalability of HWTS. It seeks to consolidate existing knowledge and experience and distil the lessons learnt. Its primary aims are to 1) review the development and evolution of leading household water treatment technologies in their efforts to achieve scale, 2) identify the main constraints that they have encountered and 3) recommend ways forward.

This report evaluates some pre-selected households water treatment systems including boiling, their respective strengths and weaknesses and their potential impact on people with weakened immunity.

This training manual on household water treatment options provides information on safe water, water pollution sources, water quality situation of Nepal and various household treatment options including introduction, its advantages and limitation with points to remember while boiling on pages 14 and 15 (Nepali).

This training manual describes the need of safe drinking water and sanitation and provides relevant information on HWTS process, technologies. It is good reference material for trainers to conduct training on HWTS.

Flipchart presentation on description of different household water treatment options including introduction, installation and organisation and maintenance procedures of each technology (in Nepali).

Factsheet on different household water treatment options and safe storage with its advantages and limitations, including description of boiling. (Nepali)

This webpage provides a simple description including advantages and disadvantages of boiling water as HWTS options.

How Long to Boil Water for Purification?

How Long to Boil Water for Purification?
https://traveltips.usatoday.com/long-boil-water-purification-62933.html [Accessed: 20.05.2019]

This weblink contains instructions on how to boil water to purify it safely.