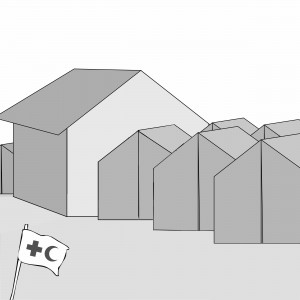 The term camp refers to a form of settlement in which refugees or Internally Displaced People (IDPs) reside and receive protection, humanitarian assistance and other services from host governments and humanitarian actors (UNHCR 2015a). A camp's location, size, design and duration are context-specific. Usually, a national or international non-governmental organisation or a national authority assumes the responsibility for the camp management. This factsheet describes the different types of camps, including reception and transit centres, collective centres, planned camps and self-settled camps.

Factsheet Block Body
Currently, more than 43 million people worldwide are forcibly displaced as a result of conflict and persecution, and several million remain displaced because of natural disasters. Out of these 43 million refugees, 27 million are Internally Displaced People (IDPs) – displaced within their own homelands – while 15 million are refugees that cross international borders due to civil or political unrest, war, internal conflicts or unfavourable economic conditions in their own countries (UN 2016). It is imperative to ensure immediate protection and assistance for those affected by displacement, and sometimes camps are the only option and a last resort for hosting displaced persons (IOM, NRC AND UNHCR 2015).

Definition and Characteristics of Camps

Factsheet Block Body
The term camp refers to a form of settlement in which refugees or IDPs reside and receive protection, humanitarian assistance and other services from host governments and humanitarian actors (UNHCR 2015a). Camps allow for a centralised care of displaced communities and its characteristics vary widely, depending on parameters such as freedom of movement, mode of assistance, economics, mode of governance, designation as temporary locations and population size and/or density (SCHMIDT 2003).
Usually, a national or international non-governmental organisation or a national authority assumes the responsibility for camp management. However, the ultimate responsibility to provide protection and humanitarian assistance to people in need within its sovereign boundaries lies with the host government (IOM, NRC AND UNHCR 2015). Camps serviced by international agencies and/or United Nations organisations are coordinated by the Camp Coordination and Camp Management Cluster (CCCM Cluster). This cluster is composed of a number of partner agencies and is led by the International Organisation for Migration (IOM) or the United Nations High Commissioner for Refugees (UNHCR) for natural disaster and conflict-induced IDP situations respectively (CCCM CLUSTER 2016).
As camps for displaced communities are intended as temporary accommodations, they consist of shelters such as tents and housing units of a short-term nature. A camp’s life cycle is composed of three phases: camp set-up and improvement, camp care and maintenance and camp closure. However, these phases are not always clearly distinguished and may overlap, for instance, when new displaced people arrive in a camp that is already inhabited and providing services (adapted from IOM, NRC AND UNHCR 2015). Each phase requires considerable input from site planners, technical staff, national authorities, the camp inhabitants and the host community (UNHCR 2015a).
Camps serve different purposes (reception and transit centres, planned camps, self-settled camps and collective centres) and as such have diverse characteristics (IOM, NRC AND UNHCR 2015).

Where large groups move, or in locations with frequent arrivals, arrangements are made for the temporary stay of displaced people. At these so-called reception or transit centres, local and international humanitarian societies register the displaced people and provide basic services for a short period of time (2-5 days) to ensure the people’s wellbeing until they can be referred to the respective processes and procedures.
Reception centres are located directly at the entry points of the displaced people (such as sea ports, gaps in barbed wires, airports, posts at geographical marked frontiers and at the edge of planned camps), whereas transit centres are usually constructed on land designated and allocated by governments. “These facilities can be used at the very onset of an emergency or within the context of a repatriation operation, as a staging point for return” (UNHCR 2015b).

Collective centres are places where large groups of displaced people find accommodation in pre-existing buildings and structures for a short period of time while durable solutions are pursued. These are usually public buildings, which were not initially constructed as accommodation, such as community centres, town halls, hotels, gymnasiums, warehouses, unfinished buildings or abandoned factories. Collective centres should not be considered as long-term accommodation and are usually used when displacement occurs in an urban setting, or alternatively when there are significant flows of displaced people into or out of a city or town. It is important to consider that the supporting infrastructure of the building (water, electricity and sanitation) can deteriorate quickly from sudden and extensive use, resulting in unhealthy living conditions. Furthermore, collective centres may cause serious and often long-lasting problems for local residents and those living in close proximity to the centres, in particular related to water, sanitation and solid waste management systems (adapted from DFID et al 2008, UNHCR 2015d and IOM, NRC AND UNHCR 2015).

Planned camps are places where displaced populations find accommodation on purpose-built sites developed on land allocated by the government (adapted from DFID et al. 2008 and UNHCR 2015a). The use of these sites is typically exclusive for the population of the site, where they are provided with full services including water supply, food distribution, non-food item distribution, education and health care (IOM, NRC AND UNHCR 2015). According to the United Nations High Commission on Human Rights, UK Department for International Development, International Organisation for Migration, Office for the Coordination of Humanitarian Affairs, and many other international organisations, camps should never be considered as the first solution (UNHCR 2015a, UNHCR 2015b, UNHCR 2015c, IOM, NRC AND UNHCR 2015 and DFID et al. 2008); however, “host governments may insist upon the establishment of camps for reasons of public order or security. Camps may be seen as providing better control over the presence and movement of refugees and as a way easing the potential for tension between refugee populations and local communities” (UNHCR 2014). According to the UNHCR Emergency Handbook (UNHCR 2015c), the size of a camp and area per capita is critical in the planning of camps as crowded conditions lead to increased morbidity and stress.

Refugees from Kosovo settle spontaneously in a makeshift camp in the no man’s land at border between Macedonia and Kosovo, near Blace. Source: H. J. DAVIES/UNHCR (1999), taken from COMMISSIONER FOR HUMAN RIGHTS (2011) .

Self-settled camps are created spontaneously when displaced communities, often smaller family groups, settle on state-owned, private or communal land, that has not been allocated or designated to accommodate them. They tend to be established prior the arrival of humanitarian organisations, that may advise the local authorities on whether the site and settlement can be supported and improved, or whether alternative settlement options need to be developed. However, in most cases, there is limited or no negotiation with the local population or private land owners over the use and access to the land, and as a result they remain independent of assistance and without receiving any humanitarian intervention (adapted from IOM, NRC AND UNHCR 2015, DFID et al 2008 and UNHCR 2015a). This often creates a conflict-ridden environment, and the provision of services may become cumbersome and costly (UNHCR 2015a).

A year on, 'model' camp for Syrian refugees has mixed record

CCCM Cluster. In: About Us. Providing Equitable Access to Services.

Only genuine justice can ensure durable peace in the Balkans

Refugees from Kosovo settle spontaneously in a makeshift camp in the no man’s land at border between Macedonia and Kosovo, near Blace.

Resource for Speakers on Global Issues. Refugees: The Numbers

This document describes the UNHCR Policy on alternatives to camp, enforced since July 22, 2014. UNHCR’s policy is to pursue alternatives to camps, whenever possible, while ensuring that refugees are protected and assisted effectively and are able to achieve solutions. The policy is directed primarily towards UNHCR staff members and those responsible for the development of protection, programme and technical policies, standards, guidance, tools and training that support such activities.

Into the cold in Syria

The UNHCR Emergency Handbook is the 4th edition of UNHCR’s Handbook for Emergencies, first published in 1982. This digital edition is primarily a tool for UNHCR emergency operations and its workforce. It contains entries structured along seven main topic areas: Getting Ready, Protecting and Empowering, Delivering the Response, Leading and Coordinating, Staff Well-Being, Security and Media.

This field report presents the situation of refugees and IDPs in Sudan, caused by the conflict which erupted in South Sudan’s capital, Juba, in December 2013, where thousands of civilians were targeted and killed. As of February 2015, the number of South Sudanese thought to be displaced by the conflict had reached 2 million, including 1.5 million internally displaced people (IDPs) and roughly 500,000 refugees living in Ethiopia, Kenya, Uganda and Sudan.

This factsheet provides key information of the Azraq Camp opened in 2014.