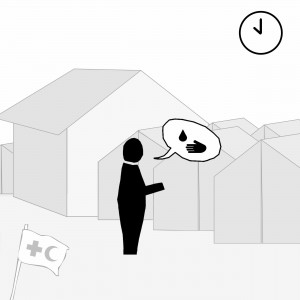 Advantages
Facilitates guidance for coordinating a response between humanitarian actors;
Promotes increasing participation and community mobilisation which will enable real behaviour change of the refugee and IDP population and will improve sustainability of the intervention;
Hygiene promotion campaigns are pivotal to water supply and sanitation interventions;
Provides clarity and concrete steps to approach soft- and hardware approaches.
Disadvantages
Coordination with water, sanitation, and health required for hygiene promotion planning and for dissemination of harmonised information can be challenging;
In can be costly to properly plan a hygiene promotion campaign and specific skills are required.

Systematic and participatory planning approaches are needed to implement effective hygiene promotion campaigns in camps during early- and later-stage emergencies. They promote positive behavioural change around household, food and personal hygiene and facilitate meeting the The Sphere Project StandardsMinimum Standards (UNHCR 2015, THE SPHERE PROJECT 2011, GWC 2009). Careful planning, execution, monitoring and evaluation will ensure humanitarian actors can provide appropriate support and refugees and Internally Displaced People (IDPs) are empowered with the knowledge, resources, willingness and practice to prevent diseases of concern in camps and prolonged encampment settings (HARVEY 2015, WHO AND WEDC 2011).

Depending on the stage of the humanitarian crisis (e.g. early emergency, later/post-acute emergency, or prolonged, protracted crisis), hygiene promotion strategies vary in terms of intensity and scale of the intervention (GWC 2009).

In later-stage emergencies, the situation is usually already well assessed and more time is available for hygiene promotion activities. The breadth of issues covered by hygiene promotion campaigns can therefore be expanded from the most pressing issue of diarrheal diseases prevention to also address other hygiene concerns and risk factors such as transmission of environment-related diseases (IOM, NRC AND UNHCR 2015, HARVEY 2015, WHO AND WEDC 2016).

As the situation stabilises in the later emergency stage, refugees and IDPs can increasingly participate in the design and management of WASH services as well as in disease prevention (HARVEY 2015). Accordingly, the range of communication and collaboration platforms and approaches should be diversified to also include Media Campaigns - Radio (DC)/TV broadcast, public announcements, Media Campaigns - Posters and Flyers (DC), signs, paintings and cartoons (see Creating Information Material (DC) factsheet), meetings and Focus Groups, celebrations, traditional and community events, film and video presentations, as well as dramas, role plays, games and songs (IOM, NRC AND UNHCR 2015). The communication methods should always be chosen based on an assessment of the cultural norms of the refugee/IDP population through consultation and participation.

Camps, where investments in behavioural change programs were made during the emergency phase, often see the population practising good hygiene behaviour for many years. Investment in behavioural change interventions are therefore a cost-effective and sustainable method of intervention and thus very relevant for later-stage emergencies (CRONIN ET AL 2008). As such, the later emergency stage is a key time to focus on community mobilisation and to engage the community through participatory processes such as Participative Hygiene and Sanitation Transformation (see invalid link factsheet).

All WASH programs should have hygiene committees or health clubs developed and run in cooperation with the refugee and IDP population and the host communities (UNHCR 2015b). Community-based WASH committees can encourage and support refugee populations to take an active role in operations and maintenance of sanitation facilities, which helps to safeguard good hygiene in the longer term (IOM, NRC AND UNHCR 2015). All programs should have gender-balanced and representative committees that are responsible for promoting hygiene and implementing hygiene promotion campaigns. If such committees are set up, clear roles, responsibilities, rules and regulations must be defined for both professional hygiene promoters and community mobilisers from the refugee / IDP population (see invalid link factsheet). Additionally, hygiene promotion should be coordinated with education efforts and opportunities should be sought to carry out hygiene promotion in schools (see School Campaigns (DC) factsheet) (HARVEY 2015).

Planning and Preparation – A Phased Approach

In the medium- to long-term post-emergency phase, on the other hand, hygiene promotion should follow an approach more in line with development settings, involving continuous assessment, analysis, design, implementation, monitoring and evaluation of risks (a concept commonly referred to as Linking Relief, Rehabilitation and Development LRRD) (HARVEY 2015).

Generally, there are two crucial matters in hygiene promotion campaigning that must be carefully plan for: 1) the distribution of hygiene sanitary products and cleaning tools or the availability of latrines (Sphere Standard 2) and 2) the implementation of a hygiene program (Sphere Standard 1) (IOM, NRC AND UNHCR 2015, THE SPHERE PROJECT 2011). The following steps should be taken when carrying out a hygiene promotion campaign in later-stage emergencies:

Every camp should have a context-specific hygiene promotion strategy in place that justifies “WHY hygiene promotion is important in the specific context, HOW the key hygiene risk practices have been identified, WHO are the priority at-risk groups and WHY, WHAT are the most effective hygiene promotion approaches and activities and WHY, HOW the target activities for each at-risk group will carry out and HOW the effectiveness of the plan will be monitored’’ (HARVEY 2015). If the strategy has not been set out during the early emergency stage, this should be rectified as soon as possible during the later emergency stage. The following components should be addressed by the strategy and prioritised according to a continuous risk (re-)assessment: community and individual action, Ensuring Appropriate Operations and Maintenance Services,Selecting and Distributing Hygiene Items, monitoring, community participation and communication with WASH stakeholders.

The six planning and preparation steps for hygiene promotion campaigns (assessment, consultation, initial planning through goals and objectives, planning through target audiences and stakeholders, planning of communication campaigns and modes of intervention and recruiting, identification and training of field workers and outreach systems) are usually carried out during the early emergency stage (see Camp Hygiene Promotion Campaigning in Early-Stage Emergencies factsheet). The later emergency stage, on the other hand, focuses on implementation, monitoring and adaptation.

While Hygiene Promotion and Community Mobilisation in Camps focuses on planning and preparation, activities in later emergency stages primarily focus on ensuring that the hygiene promotion campaign continues to work towards meeting its goals and objectives and adapts to the changing needs of the refugee and IDP population (adapted from GWC 2009 and HARVEY 2015):

Implementation and ongoing assessment of the situation

Hygiene promotion plans should be revised every six months based on monitoring outcomes (HARVEY 2015).

The guidance is applicable to later emergency stages in Camps or collective settlements.

International Organization for Migration (IOM), Norwegian Refugee Council (NRC) and UN Refugee Agency (UNHCR)`s Camp Management Toolkit provide tools and approaches to provide concrete guidance on facilitating hygiene improvement in an acute, early stage of an emergency relevant to camps. This toolkit is applicable to both IDPs and refugees living in communal settings.

This briefing paper provides basic information on Oxfam`s hygiene kits. It introduces the types of hygiene practices that are enable through the items in the kits and prices details on the contents of Oxfam’s basic hygiene kit.

This is a gap analysis report which analyses emergencies situations to identify over 50 programming gaps in the areas of water, sanitation and hygiene. The most hygiene promotion related significant gaps included the importance of understanding the context and weak community participation.

The hygiene promotion in this Mwange camp in Zambia was implemented through the WATSAN. It was a success as it convinced the refugee population that hygiene was a priority. The project was based on approaches designed to build community will and decision-making power in individuals, families, and within the communities. It built the capacity of refugees in the operation and maintenance of the systems that were established and developed. The project worked to ensure the affected populations became aware of priority hygiene practices and had adequate information and resources to protect and enhance their health. Through assessment, the project identified hygiene promotion was marginalised by health professionals in preference of other cases and to meet immediate needs and that latrines design was not compatible with religious beliefs. To address this, hygiene promoters (preferentially women) were trained to fill this gap and the latrines were redesigned. The hygiene promotion programme used multiples avenues to promote handwashing, use of latrines, and waste disposal. Incentive programs were used to encourage good practices and it was found the practices continued after the incentives ran expired.

The website provides tools and resources from the Global WASH Cluster to support the build-up and during emergency response phases. It provides resources for assessment, coordination, information management, WASH Technical, WASH Training, as well as cross-cutting issues, inter-cluster, and transformative agendas. The resources for the hygiene promotion specific tools and approaches are accessible over this platform.