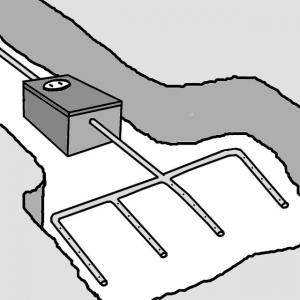 A leach field, or drainage field, is a network of perforated pipes that are laid in underground gravel-filled trenches to dissipate the effluent from a water-based collection and storage/treatment or (semi-)centralized treatment technology. They allow for a further treatment of the effluent and to recharge groundwater bodies.

Advantages
Can be used for the combined treatment of blackwater and greywater
Can be used in almost all climates (not when the ground freezes)
Has a long lifespan (depending on conditions)
Low maintenance requirements if operating without mechanical equipment
Relatively low capital costs, low operating costs
Disadvantages
Requires expert design and construction
Not all parts and materials may be locally available
Requires a large area
Primary treatment is required to prevent clogging
May negatively affect soil and groundwater properties

If there is no intention or no need to reuse wastewater or greywater, leach fields can offer an opportunity for a partial treatment of greywater or wastewater effluents from a primary treatment (e.g. septic tank, twin-pits for pour-flush toilets, biogas settler, anaerobic baffled reactor, etc.) or stormwater (precipitation water) and a safe way of discharging it to the environment and therewith recharging groundwater bodies. The pre-treated effluent flows by gravity or is pumped to a leach field for disposal. Compared to a soak pit, the leach field might be somehow safer, but is considerably more sophisticated in its construction.

Pre-settled effluent is fed into a piping system (distribution box and several parallel channels) that distributes the flow into the subsurface soil for absorption and subsequent treatment. The wastewater effluent is absorbed by soil particles and moves both horizontally and vertically through the soil pores. The dissolved organic material in the effluent is removed by bacteria living in the top ten feet of the soil. The wastewater generally percolates downward through the soil and eventually enters a groundwater aquifer. A portion of the wastewater moves upwards by capillary action and either evaporates at the surface or is absorbed by plants. If the distribution is driven by gravity, the slope until the end of each leaching line must be sufficient in order to assure a good drainage. A dosing or pressurized distribution system may be installed to ensure that the whole length of the leach field is utilized and that aerobic conditions are allowed to recover between dosings. Such a dosing system releases the pressurized effluent into the leach field with a timer (usually 3 to 4 times a day).

Each trench is 0.3 to 1.5 m deep and 0.3 to 1 m wide. The bottom of each trench is filled with about 15 cm of clean rock and a perforated distribution pipe is laid on top. More rock is placed to cover the pipe. A layer of geotextile fabric is placed on the rock layer to prevent small particles from plugging the pipe. A final layer of sand and/or topsoil covers the fabric and fills the trench to the ground level. The pipe should be placed at least 15 cm beneath the surface to prevent effluent from surfacing. The trenches should be dug no longer than 20 m in length and at least 1 to 2 m apart. To prevent contamination, a leach field should be located at least 30 m away from any drinking water source. A leach field should be laid out such that it will not interfere with a future sewer connection. The collection technology which precedes the leach field (e.g., septic tank) should be equipped with a sewer connection so that if, or when, the leach field needs to be replaced, the changeover can be done with minimal disruption.

Since the technology is underground and requires little attention, users will rarely come in contact with the effluent and, therefore, it has no health risk. The leach field must be kept as far away as possible (at least 30 m) from any potential potable water source to avoid contamination.

A leach field will become clogged over time, although this may take 20 or more years, if a well-maintained and well-functioning primary treatment technology is in place. Effectively, a leach field should require minimal maintenance; however, if the system stops working efficiently, the pipes should be cleaned and/or removed and replaced. To maintain the leach field, there should be no plants or trees on it. There should also be no heavy traffic above it because this could crush the pipes or compact the soil.

Leach fields require a large area and unsaturated soil with good absorptive capacity to effectively dissipate the effluent and should be located 30 m away from a drinking water supply . Due to potential oversaturation of the soil, leach fields are not appropriate for dense urban areas. They can be used in almost every temperature, although there may be problems with pooling effluent in areas where the ground freezes.

Homeowners who have a leach field must be aware of how it works and of their maintenance responsibilities. Trees and deep-rooted plants should be kept away from the leach field as they can crack and disturb the tile bed.

Decentralised wastewater management presents a comprehensive approach to the design of both conventional and innovative systems for the treatment and disposal of wastewater or the reuse of treaded effluent. Smaller treatment plants, which are the concern of most new engineers, are the primary focus of this book.

This paper presents a review on the septic tank and septic systems. Information on design and functional aspects, and environmental effects of septic tank systems are presented.

Rather old design manual for onsite wastewater treatment options. However, valuable information on established systems such as septic tanks, sandfilters, aerobic treatment units (suspendend growth and fixed film), disinfection, nutrient removal as well as wastewater segregation and recycling are given. Additional information is given on disposal methods and appurtenances.

This manual provides information on functionality of septic systems containing the modules septic tank and leach field and addresses the user at the household level. Construction, maintenance and operation are described.

The purpose of this guide is to assist local contracting authorities and their partners in identifying those sanitation technologies best suited to the different contexts that exist within their town. The first part of the guide contains a planning process and a set of criteria to be completed; these assist you in characterizing each area of intervention so that you are then in a position to identify the most appropriate technical solutions. The second part of the guide consists of technical factsheets which give a practical overview of the technical and economic characteristics, the operating principle and the pros and cons of the 29 sanitation technology options most commonly used in sub-Saharan Africa.