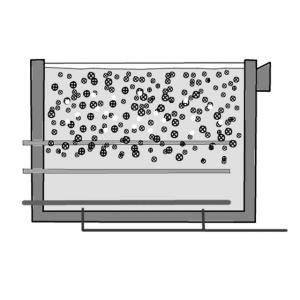 Integrated fixed film activated sludge (IFAS) is a relatively new technology that describes any suspended growth system that incorporates an attached growth media within the suspended growth reactor (U.S. EPA 2010). Biofilm carriers are generally divided in ‘dispersed media’ or ‘fixed media’. This technique, used in highly developed wastewater treatment plants, can be used as an upgrade for existing facilities or can be constructed newly. The design needs expert knowledge and the system must be operated by skilled labourers.

Integrated Fixed-film Activated Sludge (IFAS) Technology provides for additional biomass within a wastewater treatment facility in order to meet more stringent effluent parameters or increased loadings without the direct need for additional tankage. Industry practice for upgrading wastewater treatment plants usually focuses on increasing the bioreactor volume to provide the additional bacterial population required to meet the system’s kinetic needs. However, designers often encounter clarifier solids loading limitations that put an upper limit on the amount of biomass that can be carried in the suspended growth system. The advantage of biofilm processes compared to activated sludge processes is that the anaerobic, anoxic and aerobic zones can be combined in a single stage (see also rotating biological contactor, and anammox). IFAS systems allow for the additional bacterial population to exist on a fixed surface, thereby eliminating the need to increase the suspended growth population.

There are a number of different approaches to IFAS implementation but the various configurations fall into one of two basic types: “dispersed media” entrapped in the aeration basin, and “fixed media”, such as structured sheet media or knitted fabric media, fixed-in-place in the aeration basin (BRENTWOOD 2009).

The Integrated Fixed-film Activated Sludge (IFAS) process combines the advantages of conventional activated sludge with those of biofilm systems by combining the two technologies in a single reactor (see also rotating biological contactor, anammox or trickling filters). Typically, an IFAS configuration will be similar to an activated sludge plant, with biomass carriers (described above) introduced into carefully selected zones within the activated sludge process. This allows two distinct biological populations to act synergistically, with the Mixed Liquor Suspended Solids (MLSS) degrading most of the organic load (BOD), and the biofilm creating a strongly nitrifying population for oxidation of the nitrogenous load (NH4+).

Operation and maintenance of fixed film systems is normally carried out by skilled labourers. The effluent water from the IFAS system should be clarified (see graph above) before it is discharged. Waste sludge still contains hazardous substances (e.g. heavy metals or pathogens). It should be further treated (e.g. anaerobic digestion or composting) or dewatered (e.g. mechanical dewatering or drying beds) and discharged correctly.

All IFAS systems, whether based on dispersed or fixed media, require adequate preliminary treatment design and operation. Primary clarification or fine screening will prevent ragging and material build-up on the media in the aeration basin and clogging of the dispersed media and retaining screens (BRENTWOOD 2009). All operational activities must be carried out by skilled labourers.

IFAS technology has been incorporated into municipal/industrial wastewater facilities for both new construction and upgraded plants in many variations of suspended growth systems. When included in new plant design, reduced tank volumes result. New tanks must be designed to incorporate fixed or dispersed media and additional auxiliary screens should be added if a dispersed IFAS media reactor is chosen (adapted from BRENTWOOD 2009).

Similarly, in retrofit applications, increased treatment capacity may be realised, along with the other benefits of fixed film type processes. The existing aeration capacity needs to be evaluated to determine whether it is adequate for the increased BOD removal and biomass respiration expected with the higher level of treatment performance associated with IFAS. Media installation needs to be planned carefully to ensure that the existing basins can accommodate the fixed media modules or dispersed media systems (adapted from BRENTWOOD 2009).

Activated Sludge and Aerobic Biofilm Reactors is the fifth volume in the series Biological Wastewater Treatment. The first part of the book is devoted to the activated sludge process, covering the removal of organic matter, nitrogen and phosphorus. A detailed analysis of the biological reactor (aeration tank) and the final sedimentation tanks is provided. The second part of the book covers aerobic biofilm reactors, especially trickling filters, rotating biological contractors and submerged aerated biofilters. For all the systems, the book presents in a clear and informative way the main concepts, working principles, expected removal efficiencies, design criteria, design examples, construction aspects and operational guidelines.

Check out this pdf-presentation about an IFAS project, how it was designed, constructed and its performance.

The Florida coastal community of Green Cove Springs is experiencing sudden growth pressures from the expanding suburbs of the city of Jacksonsville. An engineering firm (Camp Dresser & McKee) was retained to plan a treatment upgrade of the Harbor Road Wastewater Treatment Plant. The objective was to meet a consent order from the Florida Department of Environmental Protection to meet an unionised ammonia limit of 0.02 mg/L for river discharge.

Aqwise- Wise Water Technologies Ltd. is a world leader in the development and implementation of innovative wastewater treatment solutions for the industrial and municipal markets. You can find information about Integrated fixed film/ activated sludge (AS), moving bed bio-reactor (MBBR), MBBR + AS and compact units.