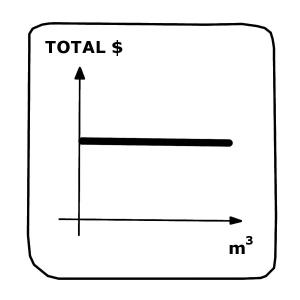 Water and wastewater tariffs determine the level of revenues that service providers receive from users in centralised or semi-centralised systems for the appropriate treatment, purification and distribution of freshwater, and the subsequent collection, treatment and discharge of wastewater. Water pricing is seen as an important economic instrument for improving water use efficiency, enhancing social equity and securing financial sustainability of water utilities and operators. Tariff setting practices vary widely around the world. In this factsheet, fixed water charges are described as a type of tariff that is simple to manage and applicable in absence of a water metering system.

Advantages
Does not need a metering system
Easy to administer
Ensures affordability of water services if differentiated by ability to pay
Provides stable cash flow if set at appropriate level
Disadvantages
Do not give signal of the real cost of providing water and sanitation services
Do not provide incentives to reduce water consumption
Households cannot reduce their water bill by economising on water use
Water might be sold at high prices by street vendors to the households with no access to piped network
It is not possible to know the exact level of water consumption because there is no metering
In the long-run, fixed charges do not generate revenues for future service expansion, hence locking communities into poor level of service

What Is a Fixed Water Charge?

Fixed water charges are commonly found in countries where water has historically been abundant and hence metering was not needed to give people an incentive to reduce water consumption. Fixed charges are still quite widely used in industrialised countries, such as Canada, Norway, and the United Kingdom (and until recently in New York City). Despite a lot of water shortages, we find fixed charges also in many small and medium size cities in India, were they are still the most prevalent way to calculate the monthly water bill (WHITTINGTON 2003).

The fixed charge itself can vary across households or consumer classes depending on characteristics of the consumer. Parameters for setting a fixed charge are for example a higher income and/or greater ability to pay. Higher fixed charges were historically set on valuable residential properties on the assumption that people with a higher income tend to use more water and/or have a greater ability to pay for the water they use. For the same reason it is common to assign commercial entities a different fixed charge than for households. Another common parameter for setting a fixed charge is the diameter of the pipe used by the customer to connect to the distribution system. Households, which generally require a smaller bore than connexions for larger concerns (e.g., businesses, hospitals), are commonly set a lower fixed charge.

On the one hand, a fixed water charge offers some benefits deriving from its simplicity and the fact that it is applicable without a metering system, which is expensive to implement. On the other hand, consumers have no incentive to economise on water use with a fixed tariff, as using more water will not increase their water bill. Furthermore, some of the water might be sold at high prices by street vendors to the households with no access to the taps or connexions. From the cost recovery point of view, “a fixed charge that provide sufficient revenues at one point in time will become increasingly inadequate as the economy and incomes grow and water use increases. Water utilities will be than reluctant to expand coverage because more customers may mean more financial losses. Fixed-charge tariffs are thus especially prone to locking communities into low-level equilibrium traps of few customers, low revenues, and poor service” (WHITTINGTON 2006).

In the city of Raipur water is supplied by the Raipur Municipal Corporation (RMC). Raipur Municipal Corporation is also responsible for billing, collection and other operation and maintenance (see also water distribution and water purification). About 65-68% of the total city-area is covered with pipe distribution and about 20% is served with bore wells. Uncovered area of 11% is supplied through tankers.

The fixed water charge in Raipur is based on the ferrule size (pipe size) and differentiated between domestic and commercial users. The charge is set without consideration of the provision costs of water supply and sewerage services (see PPT). The fee is collected once a year from the consumers. Raipur Municipal Corporation recovers just about 34% of its costs from tariff revenues. In 2009, the cost incurred in supplying water to households was about Rs 2’840 (about 62 USD) per cubic meter. Water tariffs in Raipur are at the present too low. At the same time, a considerable amount of water is lost as non-revenue water, which is the water that has been produced and is “lost” before it reaches the customer (due e.g. through leaks but also through theft). To solve these problems, the government plans to set a municipal regulatory agency, which is expected to streamline the water tariff setting procedure, while Raipur Municipal Corporation envisages the future full cost recovery of operation and maintenance and plans to introduce water metering system essential to estimate levels of non revenue water.

The fixed water charge is applicable everywhere water is provided and/or wastewater is collected. A metering system is not needed. Fixed water charge can be set at the service provider level or by national or local government and it is suitable for households with private taps or those who share taps with a homogenous social group. Involvement of local communities in the tariff setting process is important to identify the real local needs, the costs of providing a good quality service, and the best ways to recover the costs incurred (CARDONE & FONSECA 2004).

This report reviews current practices in determining user charges and researches how economic principles of pricing of urban water supply can be incorporates. It researches international practices in the UK, Australia and the Philippines and several cases in India.

The main focus of the report (here: executive summary) is the affordability of water services in OECD countries, as well as the social measures currently in place aimed at resolving these affordability problems. The report also examines the potential role of the private sector in incorporating the social dimension into water pricing decisions, as well as issues related to making the transition towards higher levels of access to water services.

The website of UN DESA (UN Department of Economic and Social Affaires) contains a section dedicated to water issues, including publications about water tariffs and subsidies in the provision of water services in developing countries.

The website of the World Water Assessment Program (WWAP) serves as a thematic entry point to the current UNESCO and UNESCO-led programmes on freshwater. It offers a review of case studies to highlight the challenges that need to be addressed in the water resources sector including water-pricing issues.