Restrictions in Water Use 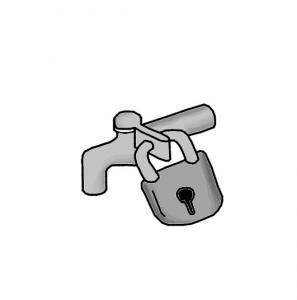 Restrictions and prohibitions are a part of command & control tools which are regulatory instruments that are direct and mandatory. Restrictions, rationing or full prohibitions are legal prescriptions that have a direct impact on the range of options open to specified social actors, as they constrain certain ways of acting or exclude some forms of conduct. Public authorities or independent regulatory agencies establish restrictions and bans which, in the case of restrictions in water use, water and land users as well as water service providers are obliged to follow (KAUFMANN-HAYOZ et al. 2001).

Advantages
Highly foreseeable effectiveness
Effective if easy to implement and targeted towards regionally limited problems
Can be rapidly implemented by government bodies (once laws are established). Quick results
Effective, as people want to avoid the penalties for non-compliance
Spread of best available technologies
Effective in the long term, even when restrictions are not imposed any more, thanks to the learning effect
Disadvantages
Only effective if compliance can be controlled and non-compliance punished
Is not a flexible tool, so it is not empowering environmental policies
High costs to control whether restrictions are followed
Is an instrument based on imposition; does not necessarily motivate people to collaborate; can result in political disapproval
Creating and instituting laws is time-consuming and has administrative costs

Restrictions and Prohibitions as a Part of Command & Control Tools

Specific actions or specific outcomes of actions can be restricted to certain conditions, rationed, or prohibited entirely. For example, during dry summers or droughts, the use of water for non-essential purposes, such as washing cars or for watering flowers is often restricted. Accordingly, restrictions place limits on the scope or freedom of action and prohibitions forbid the use of something, or command against it.

Restrictions and prohibitions are prescribed by mandatory orders. Thus, the rationale of this instrument type is based exclusively on command, control, and sanction. It is assumed that actors behave according to the prescription or norm in order to avoid penalties. Enforcement mechanisms are fundamental to the viability and effectiveness of restriction instruments. Enforcement policies rely on a variety of (conditional or secondary) instruments, ranging from licence withdrawal to criminal prosecution. Enforcement measures often involve an economic component in addition to the pure regulatory aspect (KAUFMANN-HAYOZ et al. 2001).

In most democracies, only the legislative authorities are legitimised to use command and control instruments. Although their implementation may be (partly) delegated to private bodies, the final decision on their application (and eventual enforcement measures) remains with the public authorities.

Restriction instruments can be used to influence the behaviour of any target group: individuals as well as corporate actors or private companies. Basically, these instruments apply in the same way to every actor or group of actors specified in the legal norm (KAUFMANN-HAYOZ et al. 2001).

When looking at the water use problematic, it is important to target the groups which consume most water – or which use water in a particularly wasteful way. Naturally, non-individual users (industry, agriculture) use most waters, and it can therefore help to target those groups first. One example is e.g. flood irrigation, which is highly wasteful process: most of the water evaporates and little reaches the plants. Here, an efficient way to reduce consumption would be through water restrictions and training of farmers to use water more sparingly (e.g., if applicable, drip irrigation) (HOEKSTRA et al. 2006). Also local authorities should improve their image regarding their water management before starting any restriction campaign. For example, municipalities should reduce leaks in water pipes (in most of the world’s cities, between a quarter and half of the water put into distribution networks never reaches homes because it simply leaks away; and vast losses occur through evaporation at reservoirs) (BPR 2008).

The implementation and enforcement of restrictions instruments can be troublesome in many respects. Often, implementation places heavy demands on technical competence as well as on the amount of available human and financial resources to control the compliance with imposed restrictions (KAUFMANN-HAYOZ et al. 2001). Legislation must be clear, both in regard to the way the authorities plan to control the imposed restrictions, and to what will happen to this people which do not show compliance and are caught.

Water use restrictions should those be regarded as a last resort tool that can be applied in critical situations. Longer-lasting reductions in water are achieved by a combination of measures such as awareness raising, education for specific user groups (farmers, industry etc.), economic measures etc. All those measures have their advantages and disadvantages and require different expertise and different time scales for implementation. The combination of appropriate software tools varies depending on the socio-economic, political and environmental context prevailing in a country (GWP 2009). A first step is to let people see an interest from authorities to reduce water use. Then it is important to sensitise and instruct users on how to save water during their daily activities. It is important to choose the right communication channel (radio, television, talks, internet, newspapers…) to reach these users most efficiently. It is helpful to add a section with the most frequently asked questions which can help to personalise into a local problematic perspective, and clarify the need of these restrictions.

Typical Examples for Restrictions at the Individual Consumer Level

In conclusion, water restrictions are mandatory restrictions on the use of water, which are relative to water storage levels, as defined by drought response plans. A classical example in water use restrictions is drought stages planning, which has been done in Australia at different governmental levels for many years. The success of this approach is due to sensitising campaigns, good monitoring and sanctioning systems, as well as the gathered experience throughout the years. When applying water restrictions, their announcements should indicate: commencement and termination dates, a description of water restriction levels and where they apply, definitions for each restriction level, the water savings target and the geographic area in which the restriction conditions apply described so that it can be accurately mapped (COMMONWEALTH of AUSTRALIA 2008). For instance, the different stages of water restrictions which can currently be applied in Western Australia are the following:

Restrictions and prohibitions are like all other command and control tools, top-down instruments that can be used to achieve a more sustainable water use. They are easy to enact but difficult to implement, because people have to understand and see their use. It is necessary that the compliance with restrictions can be monitored, and non compliance can be sanctioned.

Water use restrictions are a tool that should only be used in combination with other measures: awareness raising on a economical water use, training and education, the implementation of water-saving technologies at different user levels (industry, agriculture, households). It is a “quick-fix” or a tool that is used in situations of water scarcity, but not one that guarantees a sustainable use of water in the long run.

Restrictions or prohibitions will hence be most efficient if used sporadically, for example in situations of water scarcity or drought. Nevertheless, in some areas there are standard non-drought water use restrictions for year-round implementation. In order to define the specific restrictions, it is recommended form a committee with the participation of users, representatives of local communities and government bodies (PORTO et al. 2004).

Water use restrictions can be applied at different levels: national, regional or local. Lower administration levels do not always have the full power to enact restrictions. It also has to be taken in consideration that the legal frame for establishing restrictions is different in every country.

A Typology of Tools for Building Sustainability Strategies

A Typology of Tools for Building Sustainability Strategies

Since the 1980s, the Swiss federal government has actively pursued a policy to reduce the emission of pollutants from heating systems. The program bases upon three measures, which are regulatory in nature: emission thresholds, systems inspections with permits and heating controls.

Water Footprints of Nations: Water Use by People as a Function of their Consumption Pattern

Water Footprints of Nations: Water Use by People as a Function of their Consumption Pattern

HOEKSTRA, A.Y. ; CHAPAGAIN, A.K. (2006): Water Footprints of Nations: Water Use by People as a Function of their Consumption Pattern. In: Water Resources Management: Volume 21 , 35–48. URL

Paper describing the Mechanisms of Command & Control in combination with other SSWM tools in Brazil.

Paper describing the Mechanisms of Command & Control in combination with other SSWM tools in Brazil.

Short description of what water restrictions are, focussing on Western Australia.

Use and Effectiveness of Municipal Water Restrictions During Drought in Colorado

Use and Effectiveness of Municipal Water Restrictions During Drought in Colorado

This report is an analysis of different approaches utilized by eight water providers to determine the achieved levels of water savings. Mandatory restrictions are shown to be an effective tool for drought coping.

This paper presents a case for removing metropolitan permanent water restrictions by 2012 in Australian cities. To achieve this goal, a water industry reform will need to be pursued on a number of fronts.

An case study on restrictions for chemicals: After 1990, when Mongolia shifted to democracy, the Government developed and approved the Law on Protection from Toxic Chemicals in 1995 and updated a list of restricted or banned chemicals in Mongolia, including persistent organic pollutants, in 1997.

Illegal Water Use in Spain. Causes, Effects and Solutions

Illegal Water Use in Spain. Causes, Effects and Solutions

Worldwide, agriculture accounts for a large part of water usage. Illegal use of water in agriculture is a worldwide problem, and WWF presents different solutions – including restrictions – to tackle them.

This website is a useful tool to find strategies to save water at home, at school or at work. Water corporation also works in water restriction policy making.

Hosepipe Ban - Resources and discussion on the hosepipe ban, drought and water shortage

This website was conceived in 2005 when it became more and more apparent that the UK was facing a future where current water supplies could not be guaranteed. Consumers and companies can get points of reference to find out about the hosepipe ban, water shortage and droughts in general.

Australia suffers from drought for a large part of the year. That is why the Sydney water council has a structure on how to act preventively to reduce negative consequences.