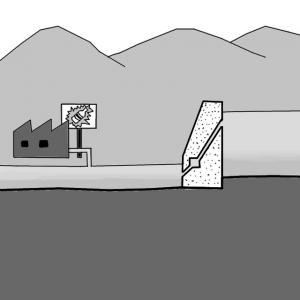 Advantages
Small-scale hydropower is a clean energy source, producing no water or air pollution
As a non-consumptive water use, small hydropower is a renewable energy source
There is minimal impact on the environment
As no reservoirs are created, small hydropower does not cause the problems associated with reservoirs such as methane emissions, displacement of people, sedimentation, and disrupted stream dynamics (see factsheets on large-scale hydropower and man-made reservoirs to find out more)
Disadvantages
To be economical, energy consumers need to be located near the hydropower scheme, thus limiting the application of small-scale hydropower to streamside communities
The stream flow limits the power generation. Every small hydropower plant has a maximum capacity, determined by the stream flow, which cannot be exceeded
Seasonal variation in stream flow causes variation and disturbance in energy supply. Advanced planning is needed to ensure adequate energy generation throughout the year, especially in areas with a significant dry season
Factsheet Block Title
Introduction
Factsheet Block Body

While water resources are valued for human health and for sustaining food production, the energy contained in moving water such as rivers or tides can also be harnessed to create energy through hydropower or mechanical uses. Hydropower schemes can either be small-scale or large scale, depending on the local conditions and the energy demand, and represent a renewable energy source that can be implemented wherever there is running water. Globally, 1.4 billion people lack access to electricity, with an additional 1 billion having only intermittent access (UNDP 2012). As running water is a resource that is globally available and renewable, harnessing its power to generate electricity can provide a sustainable source of energy to improve livelihoods and increase working productivity. Particularly in rural or developing areas, small-scale hydropower can represent a locally available, reliable source of energy where no other energy generation is feasible.

Regardless of size, the principle behind hydropower generation is the same: that the power of moving water can be harnessed to produce energy. The key elements for hydropower generation are “head” and “flow.” “Head” refers to the height of the gradient over which the water falls, while “flow” refers to the volume of water per unit time. To maximise energy production, both head and flow should be high. In other words, greater amounts of energy are generated when a large volume of water flows over a steep gradient. Hydropower plants generate electricity by directing water through a turbine, which in turn drives an electric generator. The electricity produced can either used directly, or fed into an electricity grid.

However, classifications vary from country to country as there is currently no common consensus among countries and hydropower associations regarding the upper limit of small-scale hydropower plant capacity. For instance, some European Union countries like Portugal, Spain, Ireland, Greece and Belgium accept 10 MW as the upper limit for small-scale hydropower installed capacity, while others place the maximum capacity from 3 to 1.5 MW. Outside the EU, this limit can be much higher, as in the USA (30 MW) and India (25 MW).

Because hydropower generation depends on only two factors (water flow and head) to produce energy, small-scale hydropower can be implemented in any system where these factors are met. This can include natural systems such as streams or rivers, but can also include any water network where pipes provide water flow over a decline (head). Hydropower can therefore also be integrated into many stages of the drinking water or wastewater network (KUCUKALI 2011). Most small hydropower schemes fit into two main categories: run-of-river systems, or integrated in existing water infrastructure.

In run-of-river systems, river water is diverted by a weir through an opening in the river side (the ‘intake’) into a channel. A settling basin is built in to the channel to remove sand and silt from the water. The channel follows the contour of the area so as to preserve the elevation of the diverted water. The channel directs the water into a small reservoir/tank known as the ‘forebay’ from where it is directed on to the turbines through a closed pipe known as the ‘penstock’. The penstock essentially directs the water in a uniform stream to the turbine at a lower level. The turning shaft of the turbine can be used to rotate a mechanical device (such as a grinding mill, oil expeller, or wood lathe), or to operate an electricity generator. When electricity is generated, the ‘power house’ where the generator is located, transfers the electricity to a step-up ‘transformer’ which is then transmitted to the grid sub-station or to the village/area where this electricity is to be used. Once electricity is produced, the water flow is returned back to the river. For this reason, small hydropower plants are considered a renewable, non-polluting and environmentally source of energy.

Most small hydropower plants are “run-of-river” schemes. The power is generated only when enough water is available from the river/stream. When the stream/river flow reduces below the design flow value, the generation ceases, as the water does not flow through the intake structure into the turbines.

Small-scale hydropower plants within existing water infrastructure have four main advantages compared to those which utilise rivers and streams (KUCUKALI 2011):

Small-scale hydropower can be implemented in the following ways within existing drinking water or wastewater infrastructure (SAN BRUNO et al. 2010):

Hydropower is a non-consumptive water use. Therefore, there are possibilities to link hydropower to other uses, such as irrigation in agriculture. This can reduce the investment costs for individual users, thus expanding the possibilities for income generation and development.

For more information on the Millennium Development Goals with regard to water and sanitation, see Access to Water and Sanitation, and Water Sanitation and Development.

The construction of small-scale hydropower systems depends on a number of variables such as site characteristics, power plant size, and location, with cost generally ranging from $1,000 - $20,000 USD/kW. Maintenance costs are relatively small in comparison to other technologies. Given a reasonable head, small-scale hydropower is a concentrated energy source. It is a long-lasting and robust technology, and the life of systems can be as long as 50 years or more without major new investments (SINGH 2009).

Assessments of the feasibility of small hydropower in rural areas have shown that even if population density is sparse, micro- and pico- hydropower may be cost-effective solutions due to the low cost of distribution and minimal effects on the environment (WILLIAMS & PORTER 2006). Integrating small-scale hydropower scheme as part of an existing water or sanitation infrastructure can reduce the investment costs while simultaneously producing valuable electricity that can be used by the facility or by an electricity grid.

Small hydropower can provide clean, renewable, and relatively inexpensive energy. They can be constructed in any location where there is enough water flow and head to make energy generation viable, even in rural or undeveloped locations. This can include natural water sources such as streams and rivers, or existing manmade infrastructure such as water distribution networks, wastewater collection and treatment systems, and dams. In this way, small-scale hydropower can take advantage of current infrastructure to produce power and reduce the environmental impact (KUCUKALI 2011).

Water Supply Lines as a Source of Small Hydropower in Turkey: A Case Study in Edremit

The Energy Challenge for Achieving the Millennium Development Goals

The Energy Challenge for Achieving the Millennium Development Goals

This UN-Energy paper on the importance of energy for achieving the Millennium Development Goals (MDGs)1 was drafted collectively by the UN agencies, programmes and organisations working in the area of energy, reflecting their insights and expertise. Currently, the available energy services fail to meet the needs of the poor. This situation entrenches poverty, constrains the delivery of social services, limits opportunities for women, and erodes environmental sustainability at the local, national and global levels. Much greater access to energy services is essential to address this situation and to support the achievement of the MDGs.

Comparison of hydropower options for developing countries with regard to the environmental, social and economic aspects

Comparison of hydropower options for developing countries with regard to the environmental, social and economic aspects

WILLLIAMS, A. PORTER, S. (2006): Comparison of hydropower options for developing countries with regard to the environmental, social and economic aspects. Washington DC: Proceedings of the International Conference on Renewable Energy for Developing Countries URL [Accessed: 09.05.2019]
Further Readings

Micro-Hydropower: A Promising Decentralized Renewable Technology and its Impact on Rural Livelihoods

Micro-Hydropower: A Promising Decentralized Renewable Technology and its Impact on Rural Livelihoods

The present research paper discusses the health, environment and agriculture benefits of micro hydropower to final users in Nepal.

This presentation shows all the elements for developing small hydropower in rural areas from fundamentals to financing models in Africa.

Guide on How to Develop a Small Hydropower Plant

Guide on How to Develop a Small Hydropower Plant

This guide brings together all the aspects related to developing of small hydropower ranging from business, engineering, financial, legal and administration. The document is presented in a step-by-step approach and is very helpful tool for practitioners and potential local developers of small hydropower scheme.

This report describes the development of local capacities in planning, design, implementation and operation of Small-scale hydropower systems at local and sub-regional scale in Burundi, Ethiopia, Kenya, Rwanda, Tanzania and Uganda.

This report synthesises the experience of micro hydro developments in Sri Lanka, Peru, Nepal, Zimbabwe and Mozambique. It attempts to draw out the Best Practice from this experience. The report provides a rigorous comparative micro economic analysis of the cost and financial returns of a sample of plants across the five countries.

The Importance of Micro Hydropower for Rural Electrification in LAO PDR

The Importance of Micro Hydropower for Rural Electrification in LAO PDR

This case study provides technical information regarding the use of biogas produced in municipal wastewater treatment plants for generating electricity. Moreover, it provides information on the use of hydraulic potential of potable water in water supply structure for electricity production with help of small hydropower station.

This paper determines the cost-effectiveness of developing small-scale hydropower sites in the USA aiming to contribute to the renewable energy mix of the country and thus reduced the current carbon emissions.

This document provides information on hydropower project, under the clean development mechanism scheme, located in a western region in Honduras, where it generates renewable energy with no waste and minimum environmental impact.

This document presents the general overview of small hydropower development and how it can contribute to meet the electricity needs of the national grid as well as the isolated rural areas. It presents a case study from Nepal that shows how a country that relied on external assistance for its hydropower development has now developed its local capability and utilised the internal resources available to develop it hydropower resources, especially the small hydro projects.

This presentation gives information on micro hydro projects, which includes definitions, power calculations and some technical aspects to civil works.

This factsheet provides information five small-scale hydropower stations on the municipal water system in the city of Boulder Colorado.

What is Small Scale Hydro Power

What is Small Scale Hydro Power

This is one of a series of fact sheets on potential income generating activities.

This website shows information on micro hydropower including a description of advantages and disadvantages, with a very illustrative video on how micro hydro power works.

This links is a host for practical information on how to create a micro hydropower system.

Hydropower and the Rise of Green Bonds

Hydropower and the Rise of Green Bonds
https://thewaternetwork.com/article-FfV/hydropower-and-the-rise-of-green-bonds-rCOIDUCTXGSUIXvbs3vNVQ [Accessed: 11.05.2016]

Hydropower ​and the Rise of ​Green ​Bonds looks at the ​growth and ​evolution of ​the green bonds ​market, and how ​hydropower fits ​into the ​picture.

Stay up to date about new perspectives, factsheets and more.