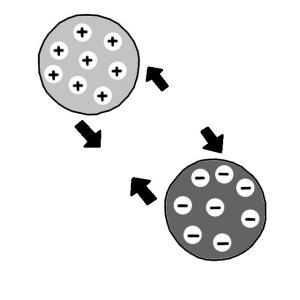 Ion exchange is a water treatment method where one or more undesirable ionic contaminants are removed from water by exchange with another non-objectionable, or less objectionable ionic substance. Both the contaminant and the exchanged substance must be dissolved and have the same type of electrical charge (positive or negative). A typical example of ion exchange is a process called “water softening” aiming to reduce calcium and magnesium content. Nevertheless, ion exchange is also efficient in removing toxic metals from water.

In 1850, Thomas and Way performed some of the first scientific research that indicated the existence of an ion exchange process. In their experiment, a solution of ammonium sulfate was passed through soil. The filtrate collected was composed of calcium sulfate instead of ammonium sulfate (KELLER 2005). The importance of this discovery (in ion exchange terms) was not fully understood until later in that decade, when it was found that this reaction was reversible. Ion exchange was then primary used to soften water.

The presence of calcium and/or magnesium in water results in water being considered “hard”. Calcium and magnesium ions in water react with heat, metallic plumbing and chemical agents such as detergents to decrease the effectiveness of nearly any cleaning task. Hard water can be softened using an ion exchange softening process (SKIPTON 2008).

The most typical application of ion exchange is the preparation of high purity water for industrial applications, water softening, recovery or removal of metals in the chemical industry.

(Adapted from NEUMANN and FATULA 2009)

Synthetic and industrially produced ion exchange resins consist of small, microporous beads that are insoluble in water and organic solvents. The most widely used base-materials are polystyrene and polyacrylate. The diameter of the beads is in the range of 0.3 to 1.3 mm. The beads are composed of around 50% water, which is dispersed in the gel-structured compartments of the material.

The main component of ion exchange equipment is a microporous exchange resin, which is supersaturated with a loosely held solution. For water softening, this is usually done with sulfonated polystyrene beds that are supersaturated with sodium to cover the bed surface. As water passes through this resin bed, ions attach to the resin beads releasing the loosely held solution into the water.

Maintenance of water softening equipment is somewhat dependent on the type of softener. Some degree of monitoring or managing the regeneration process is generally required. Adequate backwashing of the resin bed is important to ensure the regeneration of the unit. However, regeneration creates wastewater.

The costs for ion exchange systems are very variable depending on scale and region. Moreover, costs depend on pretreatment requirements, discharge requirements and utilisation.

People on restricted sodium diets due to health reasons should account for increased intake through softened water. Drinking and cooking with softened water is often avoided by having a cold water line to the kitchen tap that bypasses the water softener. This provides hard water for drinking cooking and other uses. It is not recommended to repeatedly use softened water for plants, lawns or gardens due to the sodium content.

The most common applications of ion exchangers are water softening (remove calcium and magnesium ions), water demineralisation (removal of all ions), and de-alkalisation (removal of bicarbonates). Cation exchange resins can also remove most positively charged ions in water such as iron, lead, radium, barium, aluminium and copper among others. Anionic exchange units can remove nitrate, sulfate, and other negatively charged atoms (called anions). Researchers are developing resins to selectively remove nitrate more efficiently than can currently be done.Ion exchangers are also used to remove or recover metal ions from wastewater in the chemical industry. Some contaminants (such as arsenic, fluoride, lithium ions) are difficult to remove with ion exchange due to a poor selectivity of the resins.

Ion exchangers are also used to remove or recover metal ions from wastewater in the chemical industry. Some contaminants (such as arsenic, fluoride, lithium ions) are difficult to remove with ion exchange due to a poor selectivity of the resins.

Magnetic ion exchange (MIEX) is an ion exchange resin developed as an additive to existing water treatment plants where additional organic matter is to be removed. The smaller size, magnetic properties and simple regeneration using NaCl distinguish MIEX from conventional ion exchange resins. Its use in international development applications is investigated in this review article.

This fact sheet summarises aspects related to ion exchange to soften water with an emphasis on reduction of salt usage.

This case study is about the removal of chromium from groundwater by means of ion exchange resin.

This article describes for the first time the use of magnetic ion exchange for improving Wanneroo (Australia) Groundwater Treatment Plant treatment process.

This presentation describes different aspects of ion exchange technology such as physical process, application, and theory.

Both reverse osmosis and ion exchange technologies are well established and have reached advanced levels of development. Comparison of the two processes for water demineralisation can therefore be reliably made and cost comparisons can be carried out on a case-by-case basis. This document examines the significant factors that should be taken into account in the comparison and gives guidelines for decision making.

Ion exchangers and their use in waste water treatment

Ion exchangers and their use in waste water treatment
http://ethesis.helsinki.fi/julkaisut/mat/kemia/vk/leinonen/3luku.html [Accessed: 22.03.2012]

This web link describes the use of ion exchangers and their use in wastewater treatment, including theoretical and practical information.

This website is about basic ion exchange processes in water treatment with an emphasis on applications such as softening, demineralisation, and nitrates removal.

How To Remove Radioactive Iodine-131 From Drinking Water

This is an article on how to remove radioactive iodine-131 from drinking water, talking about different technologies including ion exchange.