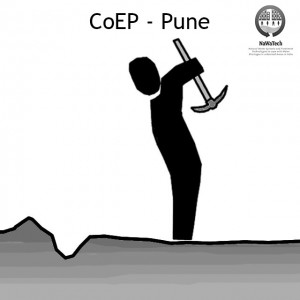 At the facilities of the College of Engineering Hostel Campus in Pune a full-scale demonstration project featuring greywater segregation, wastewater treatment with anaerobic treatments and constructed wetlands, as well as reuse of the treated water (for irrigation and toilet flushing) was realised. Furthermore, a green wall adapted to treat and reuse greywater was installed testing different filling media. These systems have great potential in urban India due to their low cost and maintenance requirements, good treatment efficiency, and being able to fit aesthetically in the urban environment.

The College of Engineering Pune Hostel Campus (COEP) case study is a further of the five case studies implemented under the framework of the invalid link in urban sites of India. The college is located in a high-density urban area of Pune and can house up to 2000 people. Greywater and blackwater are currently connected to a public sewer leading to a central wastewater treatment facility under the Pune Municipal Corporation. In the college there are many green areas and small gardens as well as a concrete interest in wastewater reuse due to the long dry season and the restrictions on available water for irrigation.

Certain areas distributed along the boundary of the campus were selected and compact systems combining anaerobic treatments and constructed wetlands (CWs) elaborated, making optimal use of the limited space availability, and approved by COEP staff. Since June 2015 the treatment system in in operation.

Considering that the irrigation demand is lower than the total wastewater production, 20-25% of the mixed wastewater (40 m3/day) is treated solely by anaerobic treatment and subsequently discharged into the sewer due to the limited reuse potential currently on site. The anaerobic treatment is composed of a primary settler, an anaerobic baffled reactor followed by an anaerobic filter; on the basis of the expected high temperatures across the year, the system should be very effective not only in suspended solid reduction but also in organic degradation (70-80% of BOD5 is expected).

Construction of the anaerobic baffle reactor at the CoEP Pune, India. Source: ESF (2015)

To treat and reuse 100 m3/day of mixed wastewater produced in the western part of the campus, where the segregation of greywater from blackwater was not possible, the treatment scheme provides an anaerobic primary and secondary treatment. In order to achieve the quality for reuse, a tertiary treatment, constituted by three vertical flow CWs (Vertical Flow Constructed Wetland) with a total surface of 405 m2, has been provided. The VF-CWs are loaded with 3 independent pumps, ensuring an alternate loading and permitting to stop periodically a basin for limited periods: this practice preserves the hydraulic conductivity of the VF-CW filters and permits to recover the functionality in case of temporary clogging of the substrate. The treated water is being pumped towards several tanks on the roofs of the buildings and reused for garden irrigation.

To treat and reuse 40 m3/day of greywater produced in the hostel building for girls at the Eastern side of the campus, where the segregation from blackwater was possible, the treatment scheme provides a preliminary treatment (degreaser) followed by two VF-CWs in parallel with an overall surface of 133 m2; making it possible to alternate the loading cycle and stop temporarily one basin. The treated water will be stored in a tank and reused to flush the toilets in the Eastern side of the campus thanks to a new dual network designed within the project.

The entire system will permit to reuse approximately 65m3/day for toilet flushing and 70 m3/day for garden irrigation, taking into account the evapotranspiration rate of the wetlands.

It has to be noted that in another site in Pune, i.e. the MJP head office (Water Supply and Sanitation Department of Maharashtra), a further pilot demonstrative project was installed, more precisely a green wall (see Vertical Garden) adapted to treat and reuse greywater (initially this installation was foreseen for COEP as well). Two parallel pilot green walls with different filling media were developed and monitored: (i) LECA plus sand, (ii) LECA plus coconut fibres. The first monitoring results are satisfactorily (52% and 58% of COD and N-NH4+ average removal efficiencies) and allow to guarantee the standard for restricted water reuse (complete disinfection cannot be guaranteed for unrestricted reuse).

The realisation of these pilot systems constitutes a great opportunity of research and dissemination on the proposed approach, besides guarantying the availability of water for irrigation during the dry season. All construction materials were easily available and, therefore, these systems can constitute a cost-efficient opportunity to treat polluted water while improving aesthetic and bio-climatic features of urban surroundings. Currently the spread of CWs in India is still limited and there is a need to standardise the practices and design methodologies. Low space requirements and the high urban density may be a limiting factor, but the combination of CWs with anaerobic treatments is an interesting option, as demonstrated in this case study.

This document present a detailed description of the case study implemented at the College of Engineering of Pune and MJP, including history of the project, design information, materials and project components, costs and economics, and details about operation and maintenance, practical information and lessons learnt.

This document present a detailed description of the case study implemented at the College of Engineering of Pune and MJP, including history of the project, design information, materials and project components, costs and economics, and details about operation and maintenance, practical information and lessons learnt.

Vertical Gardens for greywater treatment and recycling in dense urban areas: a case-study in Pune

Vertical Gardens for greywater treatment and recycling in dense urban areas: a case-study in Pune

The paper describes the pilot installation of a vertical garden treating greywater from an office building in Pune, Maharashtra State.

This paper shows different examples from different countries (Italy, India and Tanzania) of green architectural solutions (green wall, green roof, roof wetland) in which water (rain and treated greywater) are reused as a resource, in order to reduce the use of drinking water for activities not needed a quality of water.