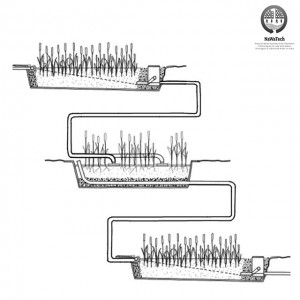 Constructed wetlands (CWs) are natural wastewater treatment systems, which have been set up all over the world as an alternative to conventional intensive systems especially for the sanitation of small communities. There are three different types of CWs: horizontal, vertical and free surface flow CWs. These types of CWs may be combined with each other in hybrid CWs in order to exploit the specific advantages of the different systems.

Various CW configurations may be combined so as to fit different types of wastewater and to increase their treatment efficiency, especially for nitrogen. These hybrid systems are normally comprised of vertical flow (VF) followed by horizontal flow (HF) CWs. HF systems cannot provide nitrification because of their limited oxygen transfer capacity. VF systems, on the other hand, do provide good conditions for nitrification but denitrification does not really occur in these systems. Thenceforward, the strengths and weaknesses of each type of system balance each other out and in consequence it is possible to obtain an effluent low in BOD, ammonia-N and total-N concentrations (VYMAZAL 2005). In general, the design consists of two stages of several parallel VF beds (usually planted with Phragmites australis), followed by one or three horizontal beds (planted e.g. Typha or Carex). In these systems, the VF beds are loaded with pre-treated wastewater for 1–2 days, and then allowed to dry out for 4–8 days (VYMAZAL 2005). HRT can range between 1 and 5 days, while space required can be very variable depending on the design and the goals of the treatment (1-10 m2/PE). The efficiency achieved in terms of BOD, TSS, and total-N removal range between 60 and 95% depending on climate conditions. Free surface flow CWs as final treatment may contribute to water disinfection. Construction materials (such as gravel, sand, plastics) are generally low cost and available on site (GARCIA & CORZO 2008).

Basically, operation and maintenance is similar to HF or VF CWs. Operation and maintenance activities should focus on ensuring that primary treatment effectively reduces organics and solids concentrations before entering the wetland (TILLEY et al. 2008). The difficulty in hybrid constructed wetlands is also to ensure that the system is adjusted and the beds loaded correctly (HOFFMANN et al. 2010). That means it needs expert knowledge and trained operators. The most important concern in CWs is clogging. With time, the gravel will become clogged with accumulated solids and bacterial biofilm. The material may have to be replaced every 8 to 15 or more years.

Hybrid CWs are more expensive than non-hybrid CWs. A larger area is required and they are more complicated and complex to operate, especially for adjustment and monitoring of the loads (HOFFMANN et al. 2010). However, compared to other intensive high-rate treatment options (e.g. activated sludge), hybrid CWs are still less expensive.

Many of these systems are derived from original hybrid systems developed by Seidel at the Max Planck Institute in Krefeld, Germany. The Seidel design consists of two stages of several parallel VF beds followed by two or three HF beds in series (VYMAZAL 2005). In the early 1980s, several hybrid systems of Seidel's type were built in France and in UK. In the 1990s and early 2000s, VF–HF systems were built in many European countries, e.g. in Slovenia, Norway, Austria, France and Ireland and now this type is getting more attention in most European countries (VYMAZAL 2005). In mid-1990s, JOHANSEN & BRIX (1996) introduced a HF–VF hybrid system. This system was implemented firstly in Darzlubie in Poland (OBARSKA-PEMPKOVIAK 1999). Recently, hybrid CW often includes a FWS stage. This design was implemented in different locations. In Italy, it was successfully used to treat concentrated winery wastewaters (MASI et al. 2002). In Montreal (Canada) it was implemented for domestic wastewater treatment (LAOUALI et al. 1996). At Yantian industry area in Shenzen City in southeast China, it is used to process industrial wastewater (WANG et al. 1994).

Hybrid CWs are effective to remove organic matter, suspended solid and nutrients from landfill leachate, river polluted water, domestic, industrial, hospital, runoff and agricultural wastewaters in lab-scale, pilot-scale and full-scale with various configurations (SAYADI et al. 2012). Despite their versatility and their strong potential for application in small communities of developing countries, hybrid systems have not found widespread use in India, due to lack of awareness and local expertise in developing the technology on a local basis.

During the last decade, different hybrid CW systems were implemented in Nepal (UN-HABITAT 2008):

In Taiwan, hybrid CW systems have received tremendous interests for water quality enhancement during the last years due to insufficient sewage treatment and groundwater deterioration (YEH & WU 2009). The performance of a field-scale hybrid CW system implemented at National University of Kaohsiung was assessed. The system included an oxidation pond, two serial surface flow wetlands with a cascade in between, and a subsurface flow wetland receiving secondary treated dormitory sewage. The results of the study showed an average TSS, BOD and COD removal efficiency of 86.7, 86.5 and 57.8%, respectively, while Total Kjeldahl Nitrogen and Ammonium decreased from 4.08 to 1.43 and 3.74 to 1.21mg/L, respectively (YEH & WU 2009).

Three different multistage constructed wetland plants for wineries wastewater treatment, located in central Italy, have been monitored and designed by the IRIDRA Ltd engineering firm. This paper presents the principal design specifications, a description of the plant operations and the analyses of influent and effluent characteristics (pH, COD, BOD5, TN, TP, TSS).

The treatment efficiency of 2- and 3-stage constructed wetlands (CWs) was evaluated for treating domestic sewage from houses surrounding agricultural villages.

This essay describes the horizontal sub-surface flow and the two basic designs of hybrid constructed wetlands for wastewater treatment.

The main objectives of this study were to investigate pollutant removal efficiencies and mechanisms within field-scale hybrid natural purification systems. The studied hybrid constructed wetland systems include an oxidation pond, two serial surface flow wetlands with a cascade in between, and a subsurface flow wetland receiving secondary treated dormitory sewage.