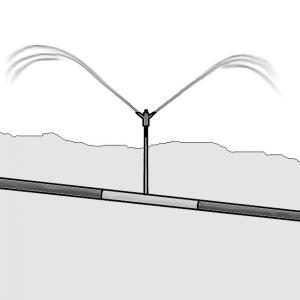 المزايا
No terracing required
Suitable for almost all types of soil
Doses, application rates and times adaptable to the needs of the plant and soil type
Independent from the topography of the area (even areas located at higher elevations than the source can be irrigated)
Utilisation of the entire area with no need for channels (HOVE 2011)
Possibility of adding fertilisers or pesticides
Possibility of irrigating for other purposes: sprouting, frost protection or cooling during hot periods (HOVE 2011)
العيوب
Incurs high operation expenses due to the energy needed for pumping, labour and relatively large investment in equipment: sprinklers and pipes (HOVE 2011)
Sensitivity to wind, causing evaporation losses (HOVE 2011)
The unavoidable wetting of foliage in field crops results in increased sensitivity to diseases (HOVE 2011)
Debris and sediments can cause clogging
Capital cost is high with greater operational costs due to higher energy requirements (HOVE 2011)