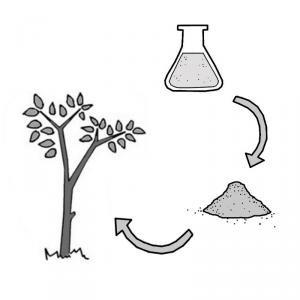 Urine in the ecosystem causes eutrophication or algae blooms, which suffocates fish and kills aquatic ecosystems. Urine is so effective at helping algae grow because it is rich in nitrogen, potassium, and phosphorus; these are the three main ingredients found in commercially produced fertilisers. Struvite produced from urine can be applied to fields just like any other fertiliser. In a simple granulation drum, the powder can be transformed into granules. In granular form, a fertiliser is easier to apply and does not cake in moist environments. Struvite performs comparably to diammonium phosphate (DAP) fertiliser.

المزايا
Volume and weight of carrying urine is reduced
Nutrients can be stored over time
Handling is more user-friendly in powder form
Bio-available: The nutrients in struvite can be readily absorbed by the plant
Slow-release: Due to its low solubility, struvite guarantees a slow but steady nutrient supply
Highly pure: contaminants (e.g. pharmaceuticals or heavy metals), which may be present in the urine, do not precipitate with the struvite
العيوب
High cost for the set-up of the reactor and the urine collection system
Dependent on the socio-cultural acceptability
Limited knowledge on the part of the farmers

Nitrogen and phosphorus are two major valuable nutrients found in urine, which are both essential macronutrients for the plants (see also nutrient requirements). Huge quantities of urine are most often difficult to transport and to keep due to its unpleasant odour. To overcome these issues, Struvite can be produced. Struvite (MgNH4PO4•6H2O), sometimes also called Magnesium Ammonium Phosphate Hexahydrate (M-A-P), has many of the fertilising properties of urine with several advantages: the volume and weight are reduced, it can be stored in a compact form and it is easy to handle, transport and apply- especially in a granulated form.

Struvite is a naturally occurring precipitate in aged urine. It is formed out of some of its compounds when the pH-level of the urine exceeds a distinctive level due to chemical changes happening during storage. The Struvite molecules are formed through a combination of dissolved magnesium, ammonium and phosphate ions. Since the concentration level of magnesium is considerably lower than the concentration of the other compounds this natural process stops when all the magnesium ions in solution are fixed. However, this process can be stimulated again by artificially adding magnesium to the stored urine. By this, the precipitation of Struvite continues until one of the other in the process involved components (ammonium and phosphate) are depleted. In normal urine, the concentration of phosphate is subsequently the limiting factor. The artificial addition of magnesium to urine is therefore a very convenient way of fixing the phosphorus and a part of the nitrogen that is contained in urine (TILLEY et al. 2008; UDERT 2002; UDERT et al. 2006) (see also producing struvite from urine).

Use of struvite in agriculture

According to it’s chemical composition, Struvite has an NPK-value of approximately 6:29:0:(Mg)10. It shows some advantageous properties like a slow nutrient release and good P availability.As regards the plant availability of phosphorus (P) from struvite, it was found that there is no significant difference between struvite and mono-calcium phosphate, a source of water soluble P that is generally considered to be fully plant available. However, the plant available nitrogen is not enough for optimal growth, but higher struvite application would significantly increase the soil pH level to a degree where it might have negatively affected nutrient availability and uptake. Moreover, the magnesium content is very high. In general, the average amount of nutrients that should be applied to the soil should follow the order N >= K > P > Mg. It is therefore suggested that for an optimal use, a combination of other fertilisers together with struvite should be used. Especially an increase of the nitrogen content would be advisable since nitrogen is the nutrient that most of the farmers look for. Most suitably a ready-made mixture with an optimal nutrient ratio could be supplied.

Quality and costs of struvite fertiliser

One of the big advantages of Struvite that might be recognised by the local farmers is for its purity and product reliability. Whereas the industrially supplied chemical fertilisers are likely to be polluted with unwanted side products and heavy metals, even when coming from official channels. For fertilisers coming from informal sources (>60%) even the actual nutrient concentration itself is of big question. As locally produced fertiliser like struvite would surely get more credit from farmers because its source is known and a reliable availability can be expected. This might even be a factor supporting a higher price compared to other fertilisers.

Amongst the possibilities for nutrient recovery from urine, struvite precipitation is technologically most accessible, as it does not necessarily involve any sophisticated apparatus (see producing struvite from urine). Where direct application of urine is not an option, and external sources of nutrients are not available or economically or environmentally not adequate, struvite may serve as an intermediate solution between on-farm nutrient recycling and global nutrient transfer.

Urine collection (labour) and transport (fuel) accounts for a large proportion of the costs, and therefore struvite production is more appropriate for areas where large volumes of urine are available within a small area; public toilets, schools and stadia are promising sources of urine. Magnesium should be available in a suitably soluble form, in sufficient quantities and at an affordable price to allow for an economic operation of the struvite production plant. Whereas direct application of urine may face low social acceptance, struvite, as a urine-derived but odourless product is generally well accepted.

In order to establish struvite production as an additional and beneficial usage option for source separated urine from UDDT toilets the acceptance by the community is of central and decisive importance. Only if the local farmers perceive it as a viable, comfortable and profitable usage option they will incorporate it into their farming practices.

A Pilot-scale Study of Struvite Precipitation in a Stirred Tank Reactor: Conditions Influencing the Process

The Fate of Nitrogen and Phosphorus in Source-separated Urine

Struvite (magnesium ammonium phosphate hexahydrate) is a biogenic mineral of low solubility. Its use as fertiliser has been limited to high value crops because of the additional cost of manufacture. With the advent of new interest in removing phosphorus from waste streams before land application, recovery of phosphorus asStruvite has gained new interest. Pot studies show that Struvite outperforms diammonium phosphate on a unit-for-unit basis in terms of dry matter production, P uptake, and extractable residual P. Various local waste streams are candidates for Struvite removal with little or no chemical additions using molecular templates as nucleating surfaces.

This study has evaluated eleven precipitated phosphates as sources of phosphorus (P) or plant growth by comparing their effectiveness with that of monocalcium phosphate (MCP), a source of water-soluble P that is generally considered to be fully plant available. The precipitated phosphates comprised Struvites recovered from wastewater discharges (mainly magnesium ammonium phosphate), laboratory synthesised Struvites, a synthetic iron phosphate and a recovered calcium phosphate. The grass dry-matter yields and P offtakes given by the synthetic and recovered Struvites were not significantly different statistically either between themselves or to MCP applied at the same rate. On this basis these Struvites could be used to recycle P to similar soils and the effect of the P on crop yield should be similar to that of MCP.

Press release on the motivation for struvite recovery in a developing country setting.

News feature describing the advantages of recycling nutrients from urine in struvite form.

The intermediate project report gives an overview on the STUN (Struvite Recovery from Urine in Nepal) project. STUN is a joint collaboration project of Eawag (Swiss Federal Institute of Aquatic Science and Technology) and UN-Habitat Nepal (The United Nations Human Settlement Pro¬gramme). The goal of the STUN project is a feasibility assessment of the conversion of urine into Struvite powder as a viable means for capturing the nutrients contained in source separated urine.

Complete report on the pilot scale struvite reactor developed and operated in the Kathmandu Valley.

The poster gives a brief overview on Struvite production, its potential as a business model, as well as encountered challenges and opportunities (English).

This is homepage of the EAWAG project on fertiliser production form urine (NOVA 6) presents results form pot test and field experiments of the application in agriculture and steps forward for scaling up.

On its homepage, the EAWAG (Swiss Federal Institute of Aquatic Science and Technology) is highlighting one of their innovative research projects in Nepal, which combines improved sanitation with increased food security. The STUN project investigated the feasibility of collecting urine to produce a phosphorus-based fertiliser called Struvite.

STruvite from Urine in Nepal (STUN)

Project website on "Struvite recovery from urine in Nepal" with plenty of downloadable resources.