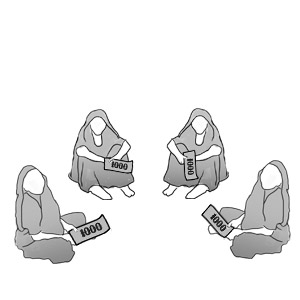 Community contributions such as user fees, household investments, community-based savings and cost sharing are a major source for financing sustainable sanitation and water management products and services. These contributions are important, because sanitation and water systems will only be improved if community members are interested and willing to invest accordingly. This section will concentrate mainly on cost sharing as a method of financing. It contributes to the promotion of household “ownership” of sanitation facilities and to hygienic practices. Furthermore, it ensures that communities are involved in designing water and sanitation solutions that will work for them in the long-term (MJOLI et al. 2009).

Advantages
Effective, because different stakeholders are involved contributing various types of contributions
Improves the sense of community ownership
Benefits local communities
Disadvantages
Time consuming for collecting information on all stakeholders and their contributions
Requires constant control of the stakeholders fulfilling their tasks
The issue of further operation and maintenance might arise after completion of the project

Cost sharing is about distributing expenses of water and sanitation projects among the main stakeholders. The purpose of cost sharing of water supply and sanitation facilities is to contribute to the building of a sense of ownership in the community. The main objective of the method is to ensure that the costs which are shared by communities will be ‘ploughed’ back into increasing coverage for scaling up and also major repair or the replacement of the installed hardware (WATERAID 2006).

Partnerships between donor agencies, local NGOs, communities, local authorities, and local private sector providers have shown to improve the effectiveness of projects in many developing countries (see public private partnerships). The development of effective partnerships, as opposed to parallel and government-isolated processes, tends to be time consuming. But as a result of active communication, shared work and harmonisation of approaches, these initiatives also tend to be better prepared to face financing challenges as they arise, without threatening sustainability of services (WPP 2010).

There are different types of expenses that can be allocated among different stakeholders according to the proposed project. These are:

Partnerships can help to build capacity through training and skills development (see also training courses on sustainable sanitation and water management. And with the involvement of local NGOs and community organisations they can help to transfer knowledge about a communities structures and needs. Partnerships can help in replicating successful initiatives from districts to entire regions and effectively contributing to increased coverage for the poorest (CARDONE & FONSECA 2003).

The low cost sanitation programme of the Orangi Pilot Project (OPP) began in 1981 in Orangi, Pakistan. Poor sanitation is undoubtedly the most distressing problem of the low-income settlements. The new immigrants succeed somehow in building houses but they fail to make proper arrangements for disposal of excreta and waste water i.e. sanitation. The cost of flush latrines and underground sewerage (see PPT) built officially by contractors is too high for poor people.

Through research OPP discovered low cost methods and taught lane residents through technical and social guidance to construct sanitary latrines in homes, underground sewerage lines in the lanes and secondary sewers. All this was done with their own money and under their own management, while the trunk mains and treatment plants remained the responsibility of the government. The example from Orangi shows that cost sharing is an important component of any development initiative and it attracted the attention of other NGOs, CBOs, governmental departments and local municipalities.

It is important to clearly define the financial and operational responsibilities of all stakeholders including the community, national and local governments, NGOs, donor supported projects and programmes, and possibly others such as religious organisations, individuals or the private sector. This entails determining who is financially responsible for which costs, and over what period of time (WPP 2010).

Adopting cost sharing methods for financing water and sanitation systems requires thorough analysis of all stakeholders. It is applicable both in rural and urban areas.

Towards the Realisation of Free Basic Sanitation. Evaluation, Review and Recommendations. Report to the Water Research Commission

This paper is about water and sanitation sector reform and improving governance in Nigeria, which is being achieved through introducing processes, guidelines and mechanism to ensure transparency, accountability and effective participation of all stakeholders. In addition, sharing of capital cost for construction of water supply systems by all three tiers of government, communities and development partners/donors is a major thrust of financing mechanism.

This paper presents comparative analysis among community-based development (CBD) and/or community-driven development (CDD) projects, and between CBD and/or CDD and non-CBD and non-CDD projects in water supply and sanitation (WSS).

Financing for Water and Sanitation. A Primer for Practitioners and Students in Developing Countries

Financing for Water and Sanitation. A Primer for Practitioners and Students in Developing Countries

This primer offers a non-technical introduction to financing for water and sanitation in developing countries.

Self-Supply as a Complementary Water Services Delivery Model in Ethiopia

Self-Supply as a Complementary Water Services Delivery Model in Ethiopia

Self-supply, where households invest to develop their own easily-accessible water supplies, is identified as an alternative service delivery model that is potentially complementary to more highly subsidised community-level provision. The approach is widespread in Ethiopia with family wells bringing additional benefits that are in line with wider government objectives, such as supporting small-scale irrigation. However, two recent studies show the current performance of traditional or family wells to be far below potential with most sources providing unsafe water in the absence of adequate protection.