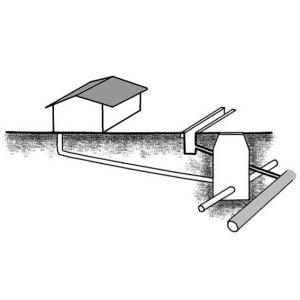 Separate sewerage consists in the separate collection of municipal wastewaters (blackwater from toilets, greywater and industrial wastewater) and surface run-off (rainwater and stormwater). The separate collection prevent the overflow of sewer systems and treatment stations during rainy periods and the mixing of the relatively little polluted surface run-off with chemical and microbial pollutants from the municipal wastewater. The design of the sewers and the (semi-)centralised treatment stations thus needs to consider the volume of the wastewater only and the surface run-off and rainwater can be reused (e.g. for landscaping or agriculture) after a simplified treatment.

Separation also eliminates the risk of sewage getting into the environment.Instead, it will be carried on to the treatment plants via a closed system, while storm water can be led to detention basins and watercourses (LADEN 2010). However, in practice there remains risk ingress of surface run-off into wastewater sewerage pipes, because of unsealed pipe joints, and unintentional or illegal connections of rainwater run-off. Conversely there may be unintentional or illegal wastewater connections to storm, water sewerage (UNEP & MURDOCH 2004).

Moreover, storm water drains in heavily urbanised areas may receive a variety of pollutants from rooftops, lorry loading bays, industrial sites and even from illegal connections to the surface water system. Therefore, publicity and inspections are needed to ensure that unexpected pollution does not arise from these sources (see also standards or restrictions). Pollutant loads discharged from urban storm water drainage systems not only vary depending on the urban structure, and the variety of materials entering the sewer network, but also on the local rainfall patterns and the processes of mixing and degradation that occur in the sewers. Hence, careful planning of the sewerage network is required to address these problems. Various modelling tools, such as rainfall modelling, sewer and sewage treatment modelling and river quality modelling, are now available to assist in this planning process (HELMER and HESPANHOL 1997).

The construction costs might be higher than for the combined sewer system because two separated networks are necessary. These must also be maintained and operated separately. Also to replace the combined system by a separated system is very costly.

(adapted from HELMER and HESPANHOL 1997)

Operation and maintenance (O&M) is an essential part of wastewater management and affects technology selection. Many wastewater treatment projects fail or perform poorly after construction because of inadequate O&M. On an annual basis, the O&M expenditures of treatment and sewage collection are typically in the same order of magnitude as the depreciation on the capital investment. Operation and maintenance requires:

Maintenance policy can be corrective, i.e. repair or action is undertaken when breakdown is noticed, but this leads to service interruption and hence dissatisfied customers. Ideally, maintenance is preventive, i.e. replacement of mechanical parts is carried out at the end of their expected lifetime. This allows optimal budgeting and maintenance schedules that have minimal impact on service quality. Clearly, O&M requirements are important factors when selecting a technology; process design should provide for optimal, but low cost, O&M.

Already the combined sewer system technology provides a high level of hygiene and comfort. A properly constructed separated system makes it even more secure, because the sewage is transported in a closed system directly to the treatment plant and cannot overflow into the environment. For general information about conventional sewers click here.

As for any sewer system, sufficient water needs to be available to carry the waste material in the sewers and therefore such systems are only applicable where enough water is available. This system is suitable for urban areas that have the resources to implement, operate and maintain such systems plus provide adequate treatment to avoid pollution at the discharge end (UNEP 2002). Separated sewers are especially suitable in areas where irregular, heavy rainfall is expected (e.g. monsoon). During these periods stormwater runoff can be managed separately and maybe stored for the dry season. Planning, construction, operation and maintenance require expert knowledge: a professional management system must be in place. When new systems are built, it is preferable to construct the separated system to prevent combined sewer overflow, limit the amount of highly-polluted wastewater and allow the reuse of surface water run-off.

This directory is part of UNEP collaboration with SIDS on the implementation of the Waste Management chapter of the Barbados Programme of Action. It focuses primarily on proven sound environmental technologies for solid, liquid and hazardous waste management plus those currently successfully being used in SIDS within the Pacific Region.

This report discusses the key findings and recommendations emerging from a pilot Citizen Report Card (CRC) on water, sanitation, and sewerage services in Karachi. The CRC, pioneered by the Public Affairs Center (PAC), Bengaluru, provides public agencies with systematic feedback from users of public services. CRC gains such feedback through sample surveys on aspects of service quality that users know best, and enable public agencies to identify strengths and weaknesses in their work.