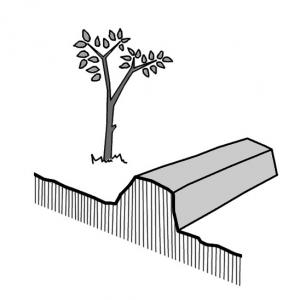 Bunds are among the most common techniques used in agriculture to collect surface run-off, increase water infiltration and prevent soil erosion. Their principle is comparably simple: by building bunds along the contour lines, water runoff is slowed down, which leads to increased water infiltration and enhanced soil moisture. Using different designs, bunds are applicable to even and uneven grounds (with a gentle slope of up to 5 per cent). Bunds are usually constructed either with soil or stones.

Ventajas
Effectively store surface run-off (increases the green water pool of the soil) and prevent erosion
Comparably simple and cheap implementation
Simple maintenance
Also applicable to fields that are already under cultivation (ADB 2008)
Desventajas
For stone bunds, shortage of stones can lead to higher implementation costs
Contour bunds need an even ground (between two contour bund or within a semi-circular bund), otherwise, water will collect in lower spots (ANSCHUETZ et al. 2003) which can cause mosquito breeding
Semi-circular bunds cannot be made mechanically and are therefore time consuming in their construction

Being one of the most often used precipitation harvesting methods in agriculture, the main purpose of bunds is to slow down and filter runoff water from rainfall and hence reduce soil degradation. As the water flow is decelerated, higher amounts can infiltrate in the soil, leading to increased soil moisture (see also conservation of soil moisture). Furthermore, water is spread more evenly, which can prevent gully formation. Bunds are basically the opposite of field trenches, where slots and trenches are excavated to stop, store and infiltrate floodwater and surface run-off.

There exist two main types of bunds: contour bunds (contour ridges) and semi-circular bunds. The choice of the type of bund depends on the local ground conditions.

Contour bunds can either be made of stones or soil (sometimes in variation with crop remains). They are constructed along a contour in order to best slow the water flowing down the slope, which increases the green water pool of the soil and prevents erosion. There should always be several bunds next to each other, whereas the distance between them depends on the slope and the soil type of the field: the steeper the ground, the closer the bunds. Contour bunds can be used for both yearly field crops as well as the planting of trees. Their use is widespread throughout Africa. In northwestern Somalia, contour bunds have reportedly increased yields of sorghum by up to 80% (MALESU et al. 2007; OUESSAR et al. 2012).

A special and well-known type of contour bunds is terracing contour bunds, often used for the production of rice. In comparison to normal contour bunds, terraces even out the slope of the ground and therefore make the paddies plain.

Due to their half-moon design, semi-circular bunds are well suited for planting individual trees. In opposition to contour bunds, each bund has to be made singularly by hand, making them much more time consuming in their implementation. As a plus factor, semi-circular bunds can also be applied to steeper fields.

It is important to choose the right measures for semi-circular bunds, as the amount of collected water depends on both its height and the position of its tips. A further factor for the appropriate size of bunds is the selected crop (see also crop selection): bigger bunds are needed for fruit trees, which require a radius and height of at least 0.6m. Furthermore, it is also important to leave free spaces between the bunds in order to enable excess water to run off.

The costs for the implementation of bunds depend strongly on the choice of design. For contour bunds, working time of approximately 32 person days is estimated per hectare. If machinery can be used, the time required reduces, but the costs may rise due to higher investments (only possible for contour bunds, as semi-circular bunds cannot be made mechanically). For stone bunds, increased costs may apply where stones are rare.

The effectiveness of contour bunds may be enhanced by placing planting pits between the bunds and/or constructing upward ties. The ties are meant to create micro-catchments along the bund and can be built manually or with the help of special machines. If there is excess rainfall, it may be helpful to build cut-off drains in order to let surplus water run off (OUESSAR et al. 2012).

The required maintenance of bunds depends on the type of construction: constructions made of stones are very resistant to erosion and therefore only need limited on-going repair (ADB 2008). Earthen ridges on the other hand need to be rebuilt to their original height after each season (ANSCHUETZ et al. 2003). To limit maintenance to a minimum, it is important that the primary construction is done carefully and solidly. Grass growing on bunds can further enhance stability as its roots fix the soil. It should therefore not be removed.

Bunds are generally applied to sloping fields in order to reduce water runoff and erosion and may also be functional for severely degraded soils (RUFFINO 2009). Contour bunds can only be constructed on even ground, whereas semi-circular bunds can also be applied to uneven terrain.

Design and construction are easy and can be done without much specialised knowledge. Stone bunds are generally more resistant and need less maintenance. But building stone bunds can be expensive if stone resources are limited. It is therefore advisable to build earthen bunds in such areas.

The main objective of this handbook on rainwater harvesting is to provide the African Development Bank with an effective reference tool for including various rain water harvesting approaches and techniques in the programming and design of projects.

Looking after our Land. Soil and Water Conservation in Dryland Africa

This handbook highlights the principles and technologies that can be used to harness the huge untapped potential of rainwater. Instead of a stereotyped view focusing only on rivers and groundwater, the book directs readers in recognising rain as the ultimate source of water for food production and other uses in rural economies across Africa.

Water Harvesting Potential for Africa. An Assessment of Costs and Impacts

This paper is a review of simple water harvesting techniques, which have been tested and found useful in arid and semi-arid regions, and which might be suitable for use in other areas. The paper also tries to show some successful cases of application of water harvesting techniques in African countries, which have increased the overall productivity of smallholder farms and hence improved farmers’ livelihood.

Water harvesting has been practiced successfully for millennia in parts of the world – and some recent interventions have also had significant local impact. Yet water harvesting’s potential remains largely unknown, unacknowledged and unappreciated. These guidelines cover a wide span of technologies from large-scale floodwater spreading to practices that collect and store water from household compounds.

An evaluation on the positive effects of stone bunds with regard to technical, ecological, economical and social factors. The conclusions are drawn from a case study in Northern Ethiopia.

This study analysed the effects of level soil bunds and stone bunds on selected soil properties, when compared with non-terraced cropland in the Bokole watershed, Southern Ethiopia. The comparison was done with regard to stored soil organic carbon, nitrogen, phosphorus, potassium, pH-level, and the cation exchange level.

This website delivers information on WAHARA, a project aiming at increasing the potential of water harvesting by closing knowledge gaps through research. It focuses on four African countries with different rainfall conditions: Ethiopia, Zambia, Burkina Faso and Tunisia.